Serving Nebraska / Covering The World
Americans Face A Nightmare Scenario: Record High Home Prices, Record High Rents… And OER Is About To Explode
While the Fed keeps touting the “transitory” nature of runaway inflation, millions of Americans will soon be living under a bridge as both house prices and rents are now rising at a record pace (at least until cities start charging a “bridge habitation” tax).
Earlier today we reported that the latest Case Shiller data showed that home prices across the country had soared at the fastest pace on history, surpassing even the epic surge from the housing bubble, after rising at a record 19.1%.

Needless to say, at the rate home prices are rising, most American will soon be priced out of owning a home – even with record low mortgage rates – if they haven’t been already, which means they will be stuck paying rent for years if not decades to come.
Alas, we have some bad news there too, because as the WSJ reports today, would-be home buyers priced out of the home market are finding little consolation when they turn instead to the single-family rental market. The reason: prices are soaring there as well. Asking rents for houses rose nearly 13% for the year to date through July, the highest annual increase in the past five years as tracked by real-estate data company Yardi Matrix, which analyzed professionally managed properties.
As we discussed extensively two weeks ago in “What Rental Hyperinflation Looks Like: “Soaring Prices. Competition. Desperation“, the sharp rise partly reflects increasing demand from people who can’t afford to buy homes as well as city-dwellers who moved to the suburbs to rent during the pandemic. Meanwhile, the supply of new houses also continues to trail historical levels relative to population growth, and builders in some places remain constrained by zoning laws and available land.
Price increases are more moderate for single-family tenants renewing their leases, said Haendel St. Juste, a real-estate securities analyst at Mizuho Securities USA. “You’ve got to be careful in this industry. You can’t be perceived as gouging.” Apartment asking rents also have risen, but at a slower pace: 8.3% for the year to date through July, Yardi Matrix said. The difference partly reflects weaker demand in downtowns that lost population after Covid-19 hit, although those markets have rebounded in recent months.
A similar picture emerges from the latest data compiled by Apartment List. The real-estate data company revealed that its national index increased by 2.1% from July to August, a slight cool-down from 2.5% the month before, but nevertheless a continuation of rent growth that has persisted since the start of the year. Since January 2021, the national median rent has increased by a staggering 13.8%. To put that in context, rent growth from January to August averaged just 3.6% in the pre-pandemic years from 2017-2019.
With rents rising virtually everywhere, only a few cities remain cheaper than they were pre-pandemic. And even there, rents are rebounding quickly. In San Francisco, for example, rents are still 12 percent lower than they were in March 2020, but the city has seen prices increase by 20 percent since January of this year. At the other end of the spectrum, many of the mid-sized markets that have seen rents grow rapidly through the pandemic are only continuing to boom — rents in Boise, ID are now up 39 percent since March 2020. Rent growth in 2021 so far is outpacing pre-pandemic averages in 98 of the nation’s 100 largest cities.
Last summer, many cities were experiencing elevated vacancy rates coinciding with a sudden decrease in demand as renter households consolidated. This summer, however, demand has been continuously heating up, leading to a supply constricted market. In contrast to this time last year, when households were rapidly consolidating due to the uncertainty of the pandemic, the total number of households in the U.S. is now greater than ever before at over 131 million. Some of these households are likely aspiring homebuyers, but they’re facing a historically unaffordable (and tight) market, which has seen a 48% drop in inventory from last year.
So, as would-be home buyers get priced out of the for-sale market, they continue to rent, likely a driving factor for the increasing incomes and budgets of renters searching on Apartment List. This high demand has created a tight market, resulting in our vacancy index dropping sharply throughout 2021 as prices increase rapidly. Rents are now up more than 13 percent this year, more than doubling the overall rate of inflation. 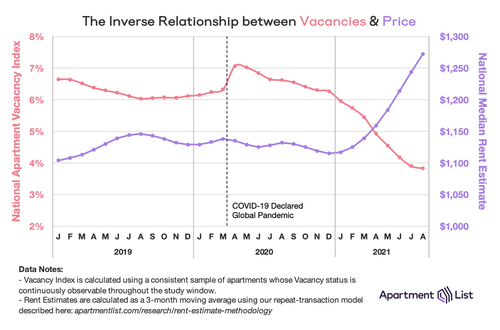 What’s just as remarkable about the current market, is that unlike previous bubbles, this time the price surge is uniform with no pockets of weakness as the 2021 rent boom is affecting virtually every major market in the country. This is a big change from 2020, when rents fell precipitously in expensive markets while growing quickly in more-affordable ones. In 2021, rents are rising across the board.
The chart below visualizes monthly rent changes in each of the nation’s 100 largest cities from January 2018 to August 2021. The color in each cell represents the extent to which prices went up (red) or down (blue) in a given city in a given month. Bands of dark blue in 2020 represent the large urban centers where rent prices cratered (e.g., New York, San Francisco, Boston), but those bands have quickly turned red as ubiquitous rent growth sweeps the nation in 2021. In 2020, 75 of these cities saw rent prices rise in August, at an average rate of 0.9 percent. This year, all 100 cities got more expensive in August, and average rent growth more than doubled. 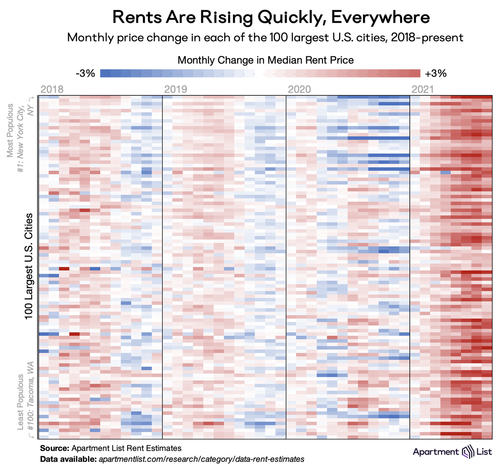 And with the August rent prices now in hand, Apartment List concludes that many of the cities that saw dramatic pandemic-era rent drops are finally back to pre-pandemic prices, including the nation’s two largest: New York City and Los Angeles. In New York City, prices went up 5.8% last month, faster than anywhere else in the country. There, the city-wide median rent price is now $2,052, above $2,000 for the first time since March of last year. On the side of the country, Los Angeles experienced 2.5 percent rent growth this month, and the median rent price now stands at $1,874. Other major cities that eclipsed pre-pandemic rent prices this month include Boston, MA; Portland, OR; and St. Paul, MN.
That means that today, “pandemic pricing” is over in most of the country. Rents remain below pre-pandemic levels in just 8 large cities: four California cities in the San Francisco Bay Area (i.e, San Francisco, Oakland, San Jose, and Fremont); Minneapolis, MN; Washington, DC; Seattle, WA; and Jersey City, NJ. The chart below visualizes the rapid rent drops and rebounds in each of these places. Oakland and San Francisco consistently made headlines throughout the pandemic for staggering rent drops and today are the only two cities retaining double-digit price reductions. The remainder should be back to pre-pandemic prices before too long. 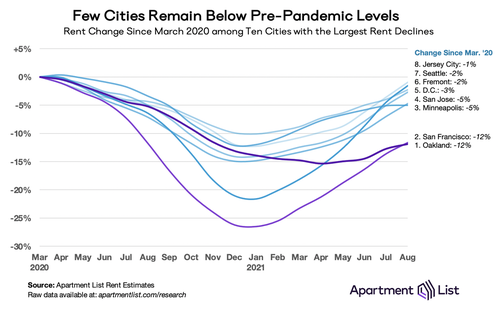 And the cherry on top, of course, is that as most middle-class Americans become poorer as they spend increasingly more of their disposable income on rent and other staples, Wall Street is getting richer.
As we reported last month, the largest US financial institutions are doubling down on home buying. Investors purchased $87 billion in homes in the first half of 2021, according to real-estate company Redfin, including a record 68,000 houses in the second quarter.
Since June, Blackstone, Invesco and Goldman Sachs alone have committed more than $11 billion to the sector. Meanwhile, other companies are building rental homes from scratch. Tricon Residential, a publicly traded house owner, reported new lease rent increases of around 21% in July, a record for the company. The average hike was a more modest 5% for renewal tenants. In an August earnings call, Gary Berman, Tricon’s chief executive, said in some markets the company could fetch close to 10% rent increases for existing tenants if it didn’t intentionally “hold back”, the WSJ reported.
Wall Street firms also have a hand in would-be buyer woes: one in six home sales went to an investor in the second quarter of 2021, according to Redfin. In Atlanta, Phoenix and Miami, it was one in four.
“The institutional players are chasing some of the same homes that would be starter homes for owner occupiers,” said Desiree Fields, a geography professor at the University of California, Berkeley who researches the single-family rental industry.
We bring this up just in case there is confusion where to direct populist anger.
* * *
OK, fine, rents are soaring, but so what – after all, if the Fed pretends not to notice and if the CPI or PCE do not capture these prices, then prices can keep rising even more and politicians and money printers will keep pretending all is well and inflation is “contained” if a little “transitory” high.
Only, that’s no longer the case – as the chart below show, there is a roughly 4 month lag between the the first real-time Apartment List print and when it registers in the official Owner Equivalent Rent series. And as the next chart shows, which overlays the latest Apartment List data set through August, with the latest CPI data, the record surge in rents will soon appear on official data – unless it is dramatically revised and manipulated – leading to what may may be an OER print north of 5% as soon as December. 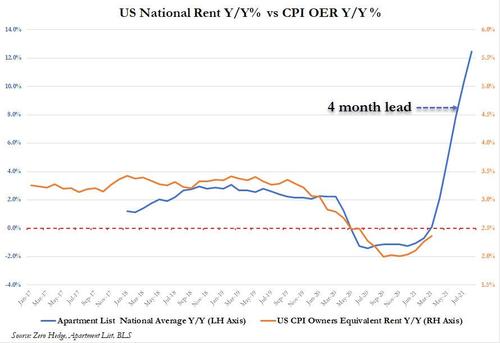 At that point, the Fed will have no choice but to taper and taper fast unless it is willing to risk the appearance of an angry – but mostly peaceful – mob at the Marriner Eccles building.