Typhoon jets, stock image, fired missiles into the caves in the Makhmur Mountains in Iraq[/caption] 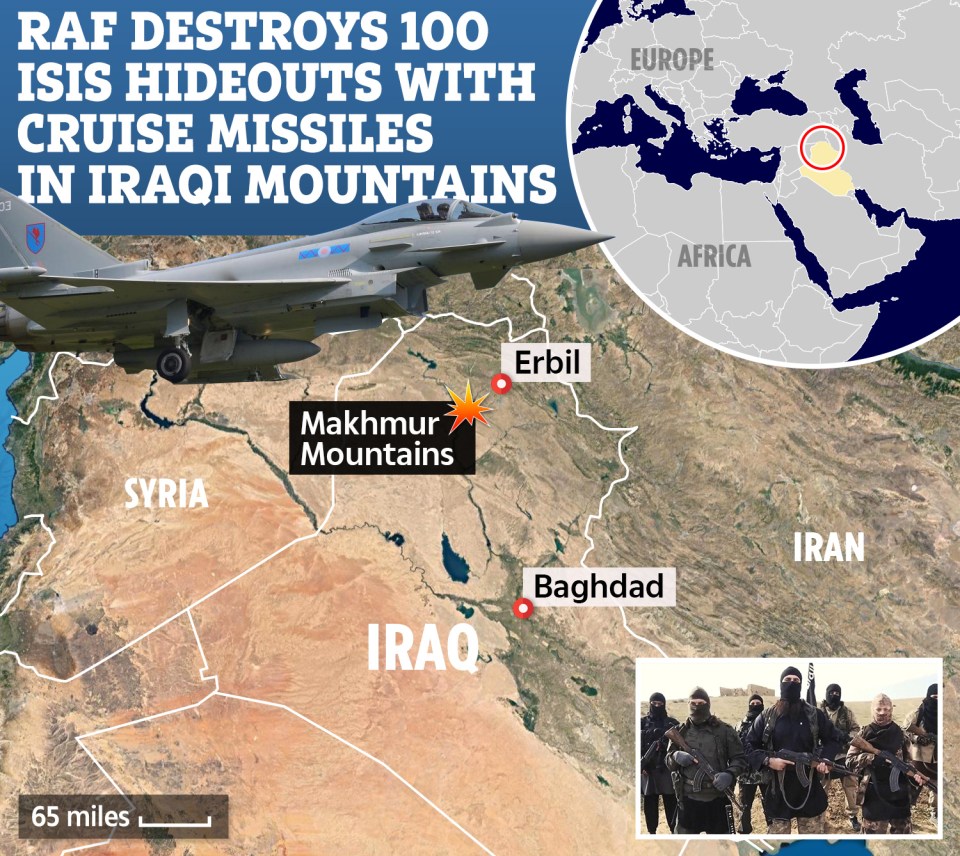 Their brave operation lasted 10 days and followed months of analysing how the terrorist group used caves as a haven, reports The Times.

The impact of the strikes is yet to be formally revealed, however it is likely dozens of fighters were killed.

But that figure is expected to be far higher this year following the recent attack on the caves.

Air Commodore Simon Strasdin, who runs the air operation against ISIS, said the operation would have a “psychological effect” on the group.

He said in a briefing: “Our ability to make Daesh turn and run will undoubtedly have a psychological effect on their ability to fight in the future.”

Strasdin said the mountain region, near Erbil, was full of deep ravines and caves.

Our ability to make Daesh turn and run will undoubtedly have a psychological effect on their ability to fight in the future.”

He said the caves had been hollowed and had generators inside, adding they went after targets “every single night, and we went on for 10 days”.

Strasdin estimated there are still 10,000 fighters in the region but insisted ISIS is now an insurgency – not a standing army.

During the operation, the RAF also used Paveway IV precision-guided bombs and it was the first time a Storm Shadow cruise missile was launched from a Typhoon FGR4 aircraft.

Defence Secretary Ben Wallace said: “This operation will prevent the terrorist group and its toxic ideology from regaining a foothold in Iraq and reduce its capability to coordinate attacks around the world.”

It comes just days after dozens of innocent people were ruthlessly killed when ISIS terrorists went on the rampage in the key industrial town of Palma, Mozambique.

Shocking footage showed bodies strewn across roads and people fleeing for their lives amid the slaughter.

Briton Philip Mawer’s body was found in the search of the contractor who was caught up in the ISIS massacre.

His family fear he was killed by terrorist militants in an ambush while trying to flee Palma.

ISIS-linked militants have been attempting to gain control of the north east region of Cabo Delgado in the country since 2017.

Most read in World News


George Floyd yelled ‘I ate too many drugs’ during arrest, cop attorney argues


You can request ANOTHER stimulus check if it was lost, stolen, or destroyed

Palma, which was first stormed last Wednesday, is in the north of the province and is near a multi-billion-dollar gas project run by Total.

Some 100 militants, many with Islamic State flags, now control the mining town of 53,000 near Africa’s largest natural gas field.

Strasdin insisted ISIS, stock image, is now an insurgency – not a standing army[/caption]