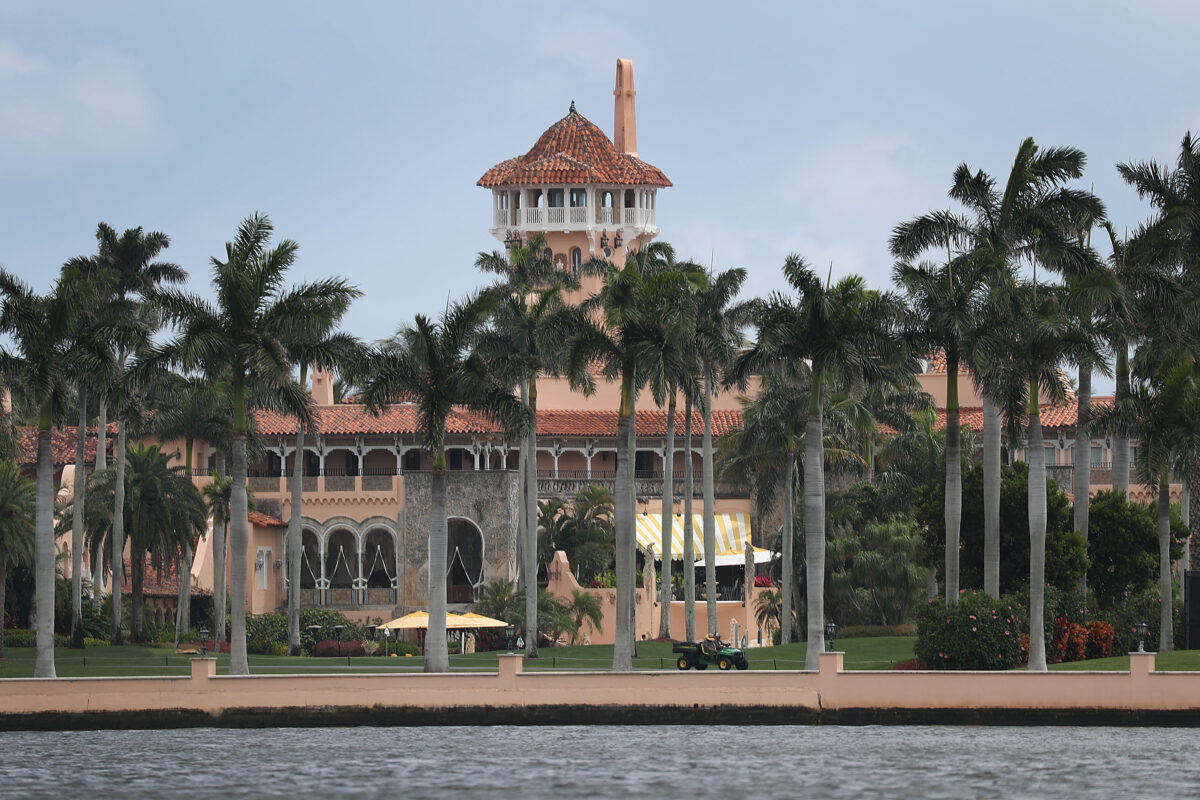 Former President Donald Trump is reportedly enjoying himself at his resort-cum-residence/club Mar-a-Lago and doing so by making unannounced cameo appearances at a number of events, including it seems, memorial services.

No, it isn’t as though he is some latter-day Maude looking for his May/December romance compatriot named Harriet. It’s just that the former president understandably has grown accustomed to an audience, so much so that he seeks one very often. And one of the perks, it seems, of living at an event space is that there is almost always an audience.

This, according to a recent report by Bloomberg titled “Election Denial and $16 Spritzers: Welcome to Florida’s Trump Coast,” the dek of which reads “Lured south by sunshine, golf, and money, the former president’s allies and hangers-on have formed an alternate universe that revolves around Mar-a-Lago.”

It is neither a charitable or harsh account of Trump’s behavior, which, if anything, casts the former president fairly as a leader currently without a flock, after four years of a White House residence and a US Federal government ostensibly at his beck and call. Who wouldn’t struggle in a similar situation?

The deeply-reported account was written by Joshua Green, who is known for his account of the relationship between Steve Bannon and Trump called Devil’s Bargain, and paints the post-presidential experience as filled with adulation in a most “Dear Leader” manner. To wit:

Tossed from the White House, banished from Facebook and Twitter, Trump has never seemed more distant from public consciousness. But while he can’t broadcast out, those same platforms offer a surprisingly intimate glimpse into his new life, thanks to the prolific posting of the club’s guests. At every moment of his day, Trump is bathed in adulation. When he enters the dining room, people stand and applaud. When he returns from golf, he’s met with squeals and selfie requests. When he leaves Mar-a-Lago, he often encounters flag-waving throngs organized by Willy Guardiola, a former professional harmonica player and anti-abortion activist who runs weekly pro-Trump rallies in Palm Beach. “Give me four hours and I can pull together 500 people,” Guardiola says. Trump recently invited the self-proclaimed “biggest Trump supporter in the country” for a private consultation at his club.

In case the comparative lifestyle with North Korean dictator Kim Jun Un is lost on the reader, Green does the math for you, making an explicit comparison via their consistent wardrobe, but suggesting perhaps a more similar bubble of adulation:

In this gilded Biosphere, Trump encounters no one who isn’t vocally gratified by his presence. When he speaks extemporaneously, so many guests post footage that you can watch the same weird scene unfold from multiple vantage points, like the Japanese film Rashomon. Trump seems so comfortable, the journalist and Instagram sleuth Ashley Feinberg has noted, that he’s taken to wearing the same outfit for days on end. Blue slacks, white golf shirt, and red MAGA cap are to the former president what the black Mao suit is to his old frenemy Kim Jong Un. Club members say his new lifestyle agrees with him. “Presidents when they finish always look so much older,” says Thomas Peterffy, the billionaire founder of Interactive Brokers LLC, who lives three doors down from Mar-a-Lago. “Not true for Trump.”

So Trump wears the same outfit on vacation. Who among us, amirite? Well, that’s certainly forgivable, or rather, the critique seems petty. But the details of his behavior? Well, it paints a picture of a gregarious sort looking for love that is equal parts reasonable and also kinda sad?

He’ll show up to anything. In recent weeks, Trump has popped into engagement parties and memorial services. A Mar-a-Lago member who recently attended a club gathering for a deceased friend was surprised when Trump sauntered in to deliver remarks and then hung around, apparently enjoying himself. This insular feedback loop, amplified by the worshipful validation he gets for doing Newsmax or OAN TV hits, doesn’t appear likely to diminish as he settles into his New Jersey golf club for the summer and prepares to resume his trademark rallies. “Donald Trump needs the adulation of the crowd the way you or I need oxygen to breathe,” says Michael Cohen, his estranged former lawyer. By all accounts, Trump’s life after the White House doesn’t resemble that of a typical ex-president so much as a foreign monarch cast into exile—like Napoleon at Elba, but with golf and a bigger buffet.

Let’s take a moment to relish in that last line: “…like Napoleon at Elba but with golf and a bigger buffet.” Outstanding wordsmith. And yeah, maybe the report isn’t terribly charitable to the former president, but it also doesn’t read unfair.

There is much more of this report to share, but I have already strained the limits of responsible aggregation. So do yourself a favor and click through to read the entire article, and if you hit the paywall, support journalism and subscribe so that writers like Joshua Green can continue to write great things like this.