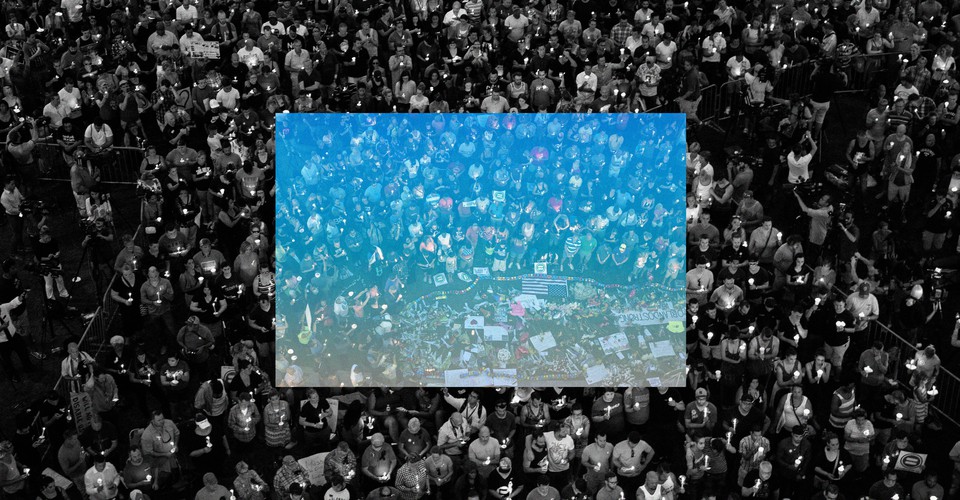 Every December, when Christmas rolls around, I hear Mariah Carey’s “All I Want for Christmas Is You” and I think of the Pulse nightclub shooting in Orlando, five years ago in the middle of June—literally as far from Christmas as you can get.

I had volunteered to fly to Florida to cover the massacre for NPR. Each time my producer and I climbed into our rental car, she plugged in her phone and the car stereo would start to play the first song in her iTunes library, which was sorted in alphabetical order. After every interview about trauma, loss, and death, we closed the car doors, heaved a big sigh, turned the keys in the ignition, and heard those familiar bells, followed by I don’t want a lot for Christmas / There is just one thing I need …

I knew that any of my colleagues could have covered the tragedy. As a journalist, I understand that there can be value to approaching a story as an outsider. That’s where I sit for lots of stories I tell: on the outside, looking in. But lived experience can be worth something too. And I brought a unique set of experiences to this particular story.

A decade before, I had spent almost a year living in Florida, filling in for a colleague. I covered whatever news the state offered up, whether hurricanes or politics. On a Monday night in Orlando in late 2004, I had just finished a story about bald eagles rebuilding their hurricane-shattered nests—very on-brand for public radio. I decided I’d earned a night out, and so I made my way to a nearly empty gay bar.

Walking through the front door, I saw to my left a dark dance floor with platforms for go-go boys, and to my right a bright-white, futuristic-looking cocktail lounge. The decor was extremely early 2000s. I turned right, grabbed a stool, and chatted with the bartenders. By the end of the night, I felt like I’d made new friends. Tuesday was their day off, so they invited me to go out with them the next night.

This is what gay bars have done for people across cities and generations. They’re havens for strangers, places to make new friends, anchors of community, and oases of safety in a hostile world. Gay bars helped birth the fight for LGBTQ rights, and they provided meeting places for AIDS activists. They have been secular churches for people rejected by organized religion. And they’ve offered a cure for the loneliness and isolation that have characterized so much of queer life over the past century.

The bartenders were named Nathan and Bobby. They picked me up at my hotel on Tuesday and took me to dinner at the Hoop-Dee-Doo Musical Revue, an absurdly campy, country-and-western-themed Disney cabaret. Tuesday was also gay night at Mannequins Dance Palace, the club that was part of Disney’s Pleasure Island complex. So that was our next stop, where we danced late into the night with a gaggle of Disney queens. Ahem, “cast members.”

I left behind a brown corduroy jacket that I loved, and I was flying back to Miami the next day. Bobby and Nathan promised to retrieve it for me from Mannequins. It arrived in the mail a week later.

When I flew to Orlando to cover the Pulse shooting in 2016, I didn’t reach out to Nathan and Bobby. Twelve years had passed since I’d last spoken to them. I didn’t remember the name of the bar where they’d worked, and I assumed they’d long since moved on. Besides, I was busy, and it felt like a tacky moment to pop out of the woodwork.

I checked into my hotel and headed to a gay venue called Parliament House, which had for decades been a center of queer nightlife in Orlando. The complex included a hotel, swimming pool, dance floor, and bar.

Two police cars sat outside, and a sign read We are Pulse—unbreakable. The shooting had happened less than 24 hours before.

In the parking lot, I met two Latino guys in their 20s named Arturo and Edgar. “We spent most of the day terrified that everybody we loved had died,” Arturo told me. The massacre took place on Pulse’s Latin night, so many of the victims were Latino.

Arturo shared a bit of wisdom that a drag queen had whispered into his ear earlier in the night.

“She said happiness is the ultimate rebellion. And I think that the man who hurt so many of our friends last night, his goal was to make us too scared to leave our houses and to make us feel like we were alone and like our community didn’t exist. And just by being here, we’re proving that that’s wrong.”

When they heard that the Parliament House drag show would go on at 10 p.m. as scheduled, a glimmer of light started to shine through the despair. “I will be in the front row tipping a drag queen far too much, with my best friend, having an amazing time because no one can tell me to do otherwise,” Edgar said.

Inside the club, I found every kind of LGBTQ person: drag queens, big leather bears, butch lesbians, trans people, all ages and races. Some were drinking and dancing. Others were hugging one another, crying, or just talking in quiet corners.

I knew that bar. I mean that literally—I’d stopped by Parliament House for a drink during a trip to Orlando years ago. But I also mean it in a broader sense: This was a place I recognized. It was somewhere I could find my people.

A 21-year-old named Julius wandered around with a friend. He had the shell-shocked look of someone who had just walked off of a battlefield.

“Well, I haven’t slept since last night, because I was actually with my friend,” he told me. “I was at Pulse.”

After Julius had left the club, he’d started getting text messages from friends who were still there, telling him someone was firing a gun inside. He’d stayed up all night trying to reach them. When day broke, he went to the LGBT center to volunteer. He left there and went to a bar, where he started to see victims’ names on TV. One was a good friend, Luis Omar Ocasio-Capo. He went by Omar, and he was 20 years old.

When Julius’s father kicked him out of the house for being gay, Omar let Julius stay with him.

Julius had a hard time telling me the story. I reflexively asked if he was okay, and then blurted out, “Of course you’re not. How could you possibly be okay?” I asked Julius if he wanted me to stop recording. He said yes. So I put my microphone away. But he kept talking.

He pulled out his phone and showed me the text messages he had sent Omar all day. They grew increasingly frantic, with no reply, and stopped only when Julius learned his friend had been killed.

Omar was one of 49 people killed that night. More than 50 were injured.

At 10 p.m., as promised, Darcel Stevens took the stage. The big Black drag queen wore a curve-hugging red dress and a blond bouffant wig. She lip-synched to a couple of songs while tears streamed down faces in the audience. And she offered a message of consolation and resolve.

On my last full day reporting from Orlando, I had an interview with the editor of the free weekly gay paper, Watermark. Billy Manes crackled with energy. Platinum-blond hair seemed to shoot off of his head like an explosion in an old Road Runner cartoon.

I always try to warm up a guest with small talk before an interview, especially during a tragedy. So I mentioned to Billy that I’d been barhopping in Orlando more than a decade ago, where I’d made friends with those two bartenders.

Billy asked for the name of the bar where they’d worked.

I described the layout—dance floor to the left, cocktail lounge to the right.

I looked up Nathan in my phone. And there was his number, along with an email address that ended in @pulseorlando.com. A little more searching told me that he was living in Chicago, working in advertising. And two days later, back in Washington, D.C., I called him.

To my shock, he still remembered that night in 2004. “We saw you there by yourself, and we wanted to make sure you were part of the group,” he said. “We didn’t want you to feel alone.”

Nathan told me that the other bartender, Bobby, still worked at Pulse, but he wasn’t there the night of the shooting. My pretense of journalistic distance popped like a soap bubble.

I sighed to Nathan, “A gay bar is so much more than just a place to get a drink.”

“Right. It’s a home. It’s a family. It really is a place for us to connect and feel safe,” he said. “I couldn’t tell you how many stories I’ve seen of people who have walked through the doors at their first gay bar they’ve ever been to and really felt welcomed.”

One of the founders of the modern gay-rights movement, Harry Hay, used to talk about “subject-subject relationships.” He argued that society raises straight people to think about relationships as subject-object: the pursuer and the pursued, the conqueror and the conquest.

Journalism often feels that way. I arrive in a community and gather stories from people who live there. Their voices become ingredients in a recipe that I mix up, bake, and serve to an audience of strangers.

Hay believed that one reason gay people exist is to demonstrate a different way of relating to one another: not in service of a selfish goal, but in mutuality and recognition of one another as more than a means to an end. Not subject-object, but subject-subject.

I returned to Orlando for the first anniversary of the shooting.

Back at Parliament House, I sat backstage with Darcel Stevens, interviewing her as she dabbed on makeup for her midnight drag show.

“You know how Stonewall got started?” she asked, sponging foundation onto her cheeks and chin. “It was the drag queens who had just had enough of it, wasn’t going to be bullied any more, wasn’t going to be arrested, y’know? So whenever there’s a social movement within our community, it’s usually the queens who go to the front.”

For the previous year, I had wondered what it took for her to walk on stage that night in 2016. “I could profoundly say in that moment, I had no idea what I was going to say,” she told me. “I had prayed to my maker and asked him to give me words of encouragement.”

She said she didn’t know what her words were that night, and she doesn’t want to. Someone had sent her a recording of it, but she hadn’t listened. Yet, five years later, I often think of her words: “You are brave, and you are stronger than you think. We are going to get through it.”