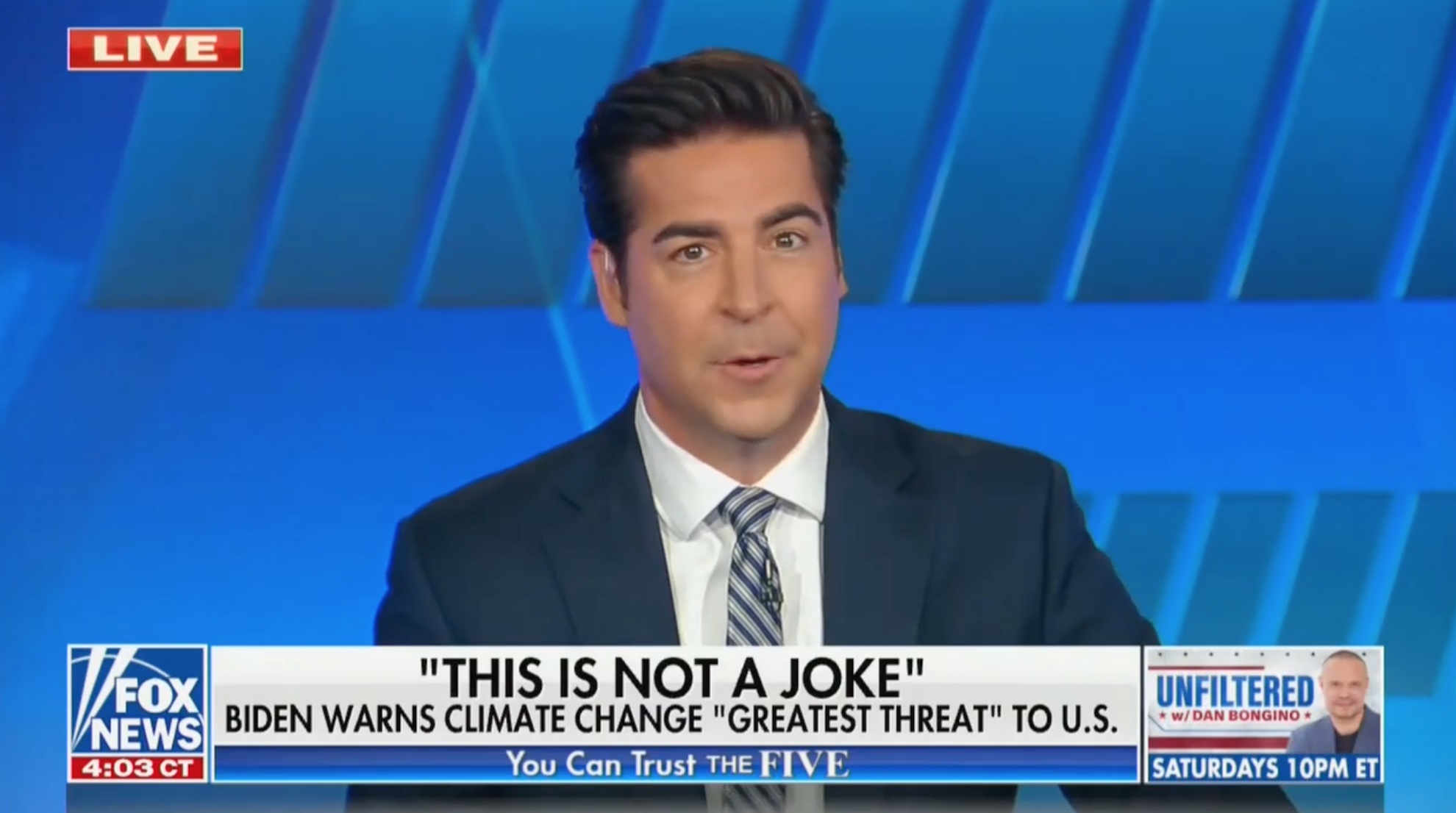 In a speech to American soldiers in the United Kingdom on Wednesday, Biden said that when he was vice president, the Joint Chiefs of Staff told him climate change was “the greatest physical threat facing the United States.

“This is not a joke,” Biden told the soldiers. “You know what the Joint Chiefs told us the greatest physical threat facing America was? Global warming.”

Gen. Mark Milley, chairman of the Joint Chiefs of Staff, clarified the Pentagon’s position Thursday. “Climate change does impact,” he said, “But the president is looking at a much broader angle than I am.”

On Thursday’s edition of the The Five, Greg Gutfeld asked Watters, “Jesse, how stupid do you have to be to say right after a pandemic caused by an engineered virus that climate change is the number one threat?” [Note: it has not been proven that Covid-19 is an “engineered virus.”]

“You have to be pretty stupid, Greg,” replied Watters. “Are you calling the president stupid?”

“I would never do such a thing,” said Gutfeld.

Usually, when I think threats, I think of death and money. So, climate change has killed how many people? Zero? The China virus killed 600,000 in this country alone, and you add the fentanyl that they bring over to Mexico. The cartels push that up here. Hundreds of thousands of fentanyl deaths here. What? Islamic terror, you count the overseas wars, you’re talking tens of thousands of American lives lost. Russian hacking. Tens of millions of dollars, maybe over a hundred million dollars.

So yeah, it’s not a joke. No one’s laughing, except we are, at Joe Biden.

A study published in the journal Nature Climate Change just two weeks ago cites human-made climate change as the culprit in 37% of global heat-related deaths from 1991 to 2018. In a sampling of 732 cities across the globe, researchers found that more than 260,000 were caused by higher temperatures from anthropogenic climate change in just those cities during that timespan.

The World Health Organization estimates that between 2030 and 2050, “climate change is expected to cause approximately 250,000 additional deaths per year, from malnutrition, malaria, diarrhea and heat stress alone.”

Watch above via Fox News.