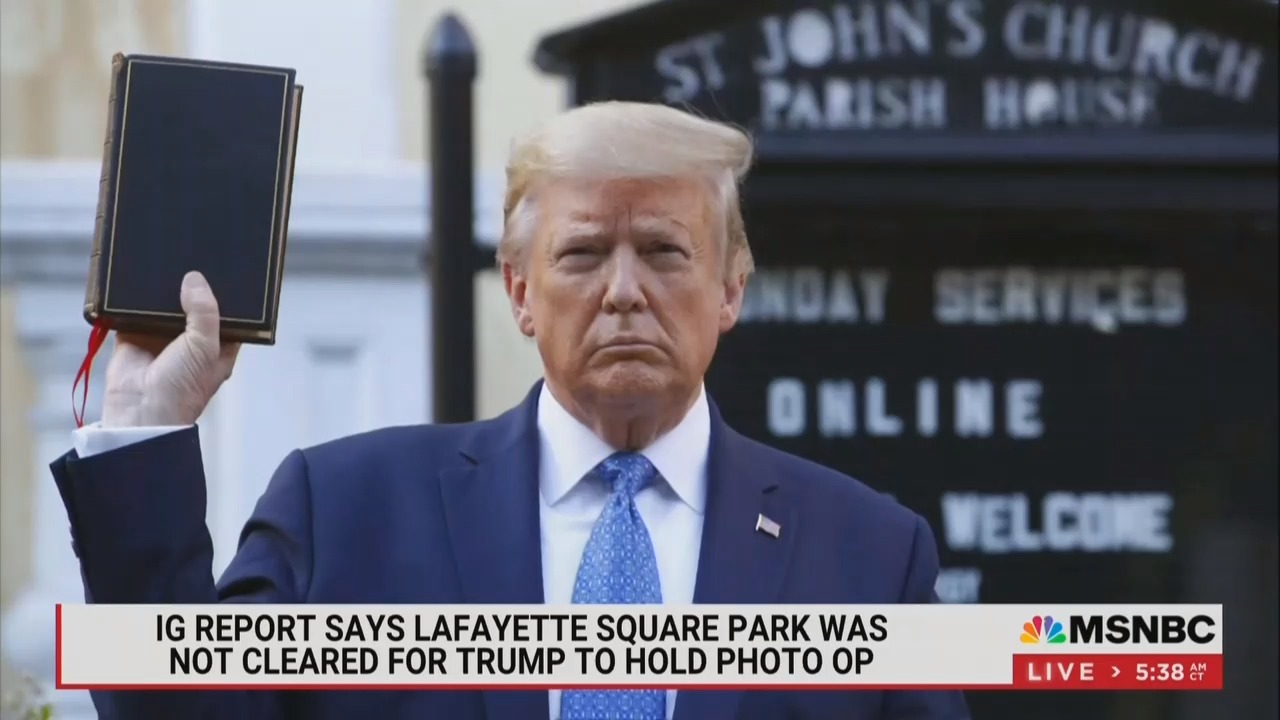 Joe Scarborough ridiculed those in the press who found a recent Inspector General’s report on the June 1, 2020 clearing of Lafayette Park as a clear exoneration of the Trump administration. Having read the actual report, the Morning Joe host said he finds that reporting “laughable on its face” and mocked those in the media who disagreed with his assessment.

Just over a year ago, multiple federal agencies joined forces to clear the park (which is adjacent to the White House) from Black Lives Matter protestors, following the killing of George Floyd. While much of the protesting was peaceful, dozens of police officials were injured, and the historic St. John’s Church was set afire. There is no doubt that there was a need for security.

But the park was cleared of protestors just 20 or so minutes before President Donald Trump, flanked by aides and cabinet members, marched to the church for what was, at the time, reported as a “photo op” in which he famously held up a bible. There was criticism that tear gas and physical force were used to remove protestors from the park, only for what was not unfairly derided as a photo op.

As such, an Inspector General was brought in to look into the allegation that tear gas was used only to clear the park of peaceful protestors for political purposes, which would be seen by many as a clear violation of the First Amendment. The IG report came out on Wednesday and was largely reported as concluding that there was no wrong-doing and that the removing of the protestors was done to replace scaffolding/fencing to secure the perimeter of the White House amid the protests, suggesting that the timing of Trump’s march through the park was just a coincidence.

Most news outlets covered the IG report in stark terms — the headlines read that there was no order from the White House to clear the park. Scarborough read the detailed report and found that take absurd.  “You talk about a lack of perspective in the panting and the overreporting here from Trump apologists,” he said. “It’s really laughable on its face.”

“You just need to read the report and read what the IG says and what the IG does not say,” he concluded. His evidence is that the Attorney General, William Barr, asked the park operations commander “Are these people still going to be here when POTUS comes out?” to which the operations commander replied (to Mr. Barr), “are you freaking kidding me?”

Or that is Scarborough’s retelling, before calling this report “awfully thin gruel” to seize upon a report that does not cover entirely the events of June 1, 2020.

Watch above via MSNBC.