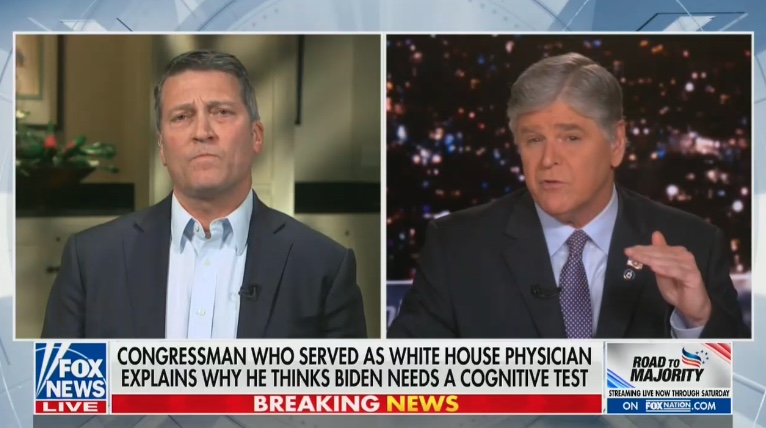 Fox News Contributor Chris Hahn fired back at Rep. Ronny Jackson after the former White House doctor called for a cognitive test on President Joe Biden during an interview with Sean Hannity.

“I want Ronny Jackson to take a drug test,” Hahn tweeted, perhaps in reference to his rumored nickname of “Dr. Feelgood” while serving as White Hosue doctor under former President Donald Trump.

I want Ronny Jackson to take a drug test.

During a Thursday night appearance Hannity — who regularly derides President Joe Biden by calling him “Sippy Cup” — asked Jackson, “Do you suspect what many Americans suspect, that he’s cognitively weak and in decline?”

In April of 2018, The New York Times reported “whispers” of Dr. Jackson’s rumored behavior while serving in the White House which explained Trump’s failed nomination to run the Department of Veteran Affairs:

A few said they had heard whispers of drinking, though all of the former White House officials said they never saw him drunk on the job. But many said Dr. Jackson earned the nicknames “Candyman” and “Dr. Feelgood” because he dispensed sleeping pills, muscle relaxants and other drugs with such ease.

Dr. Jackson is also known for the time when he gave an over-the-top medical report on former President Trump and his “incredible” genes, which many in the medical profession derided as hyperbolic and unrealistic.