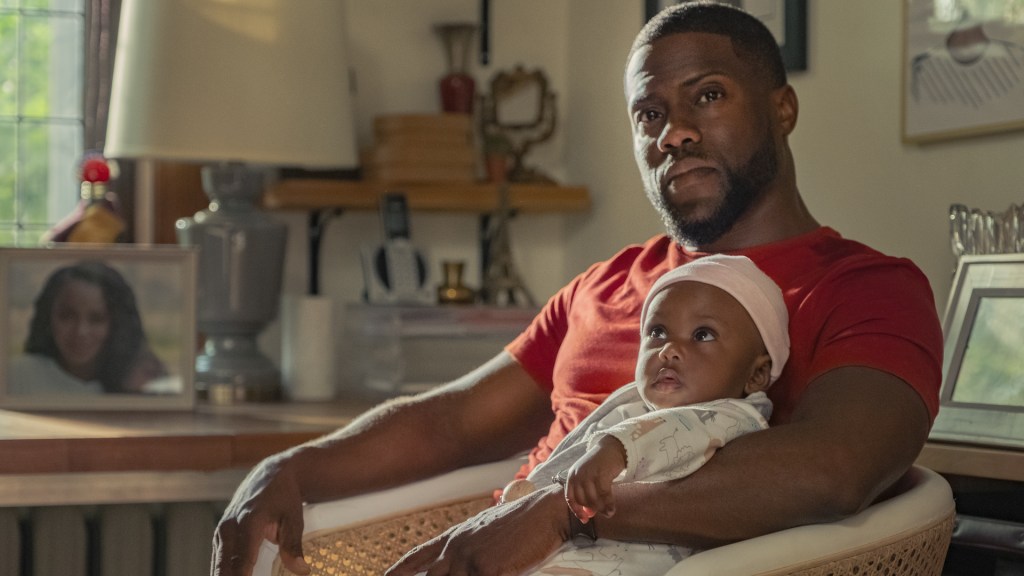 It’s no secret that Kevin Hart is one of Hollywood’s busiest and prolific entertainers, but his latest film “Fatherhood,” showcases Kevin Hart the family man.

In the movie, the comedy star makes a more serious turn for the heart-wrenching family drama based on a true story. Think Will Smith in “The Pursuit of Happyness” meets “Three Men and a Baby.”

“I think it’s a movie that’s going to truly move the needle on so many different levels,” Hart tells Variety, beaming in virtually from Budapest, where he’s filming “Borderlands.” “I’m hoping that is one that’s evergreen, that lasts forever, that people will be able to always go back and look at and get a sense of feel good from.”

The film dramatizes the true story of Matt Logelin, who became a single dad when his wife Liz died unexpectedly shortly after the birth of their daughter Maddy. Logelin first shared his story on a blog, which became the memoir, titled “Two Kisses For Maddy,” after audiences found and quickly became engrossed in the Logelin family’s story. The movie adaptation went through a couple iterations (including a planned movie starring Channing Tatum) before landing with Hart.

Paul Weitz, who mastered the tale of man meets child with the 2002 comedy “About a Boy,” first worked with Hart on “Little Fockers,” where the comedian had a bit part. But even then, Weitz says, he knew Hart had dramatic chops.

“I remember on the last day of filming, I went up to him and said, ‘I don’t think you’re a really good comedic actor, I think you a good actor,’ and that stuck in my head,” Weitz recalls.

After Weitz caught Hart’s performance in “The Upside” and read his autobiography, the director and the star worked together to craft this script to Hart’s talents, finding a way to sprinkle in some of his trademark humor atop the heartfelt core narrative.

But, for Hart, taking on was about more than proving to audiences that he could do drama. His first task was “making sure I do his story justice,” Hart says of Matt and Maddy, who visited the film’s set to give their sign off on the movie.

“[Logelin’s] book was written to heal. That book was written for him to express, get this out there and possibly help other other people who are going through the same thing,” Hart says, noting the story’s larger resonance.

“I was able to portray a Black man on the big screen in a positive light, which is something you don’t see much of,” he says. “We’re always the drug dealer or in jail, we’re gone, we’re just coming back. It’s the same thing over and over again.”

“So to have a story that was grounded, real and one that people will be able to walk away from with a sense of positivity, it felt good,” he adds.

Plus, with the film debuting just ahead of Father’s Day, Hart believes the story can also “uplift and motivate fathers to understand that we’re needed. There’s a value to having us and what an amazing value it is when the job is done right.”

In celebration of fatherhood, Hart and the film’s cast — which includes Lil Rel Howery, Anthony Carrigan, Paul Reiser and DeWanda Wise — also named some of their favorite pop culture fathers. Howery praised “Sanford and Son’s” Fred Sanford, who he says is a TV dad who often goes overlooked, while Reiser picked the iconic Dick Van Dyke.

Wise shouted out President Barack Obama, whose Higher Ground productions also produced “Fatherhood”: “I know he’s not a TV dad, but he was our country’s dad for eight years.”

Carrigan chose two options, touting Bryan Cranston in “Malcolm in the Middle” and “Breaking Bad,” saying, “I feel like between the two, most dads will kind of have a little bit of both.”

Hart selected John Amos in “Good Times,” noting that these fictional fathers are more than just characters on the screen.

“They play a major part in and [have] influence on our youth, as we’re coming up, because what you see is what you identify with, Hart says. “It’s what you would not just laugh at, but go, ‘That’s cool.’”

“I can only hope that as I continue to progress in my career, that people see just how seriously I take fatherhood,” the father of four adds. “Perfect I am not. But one thing that I don’t play games about are my kids. I never have and I never will.”

“Fatherhood” is now streaming on Netflix.