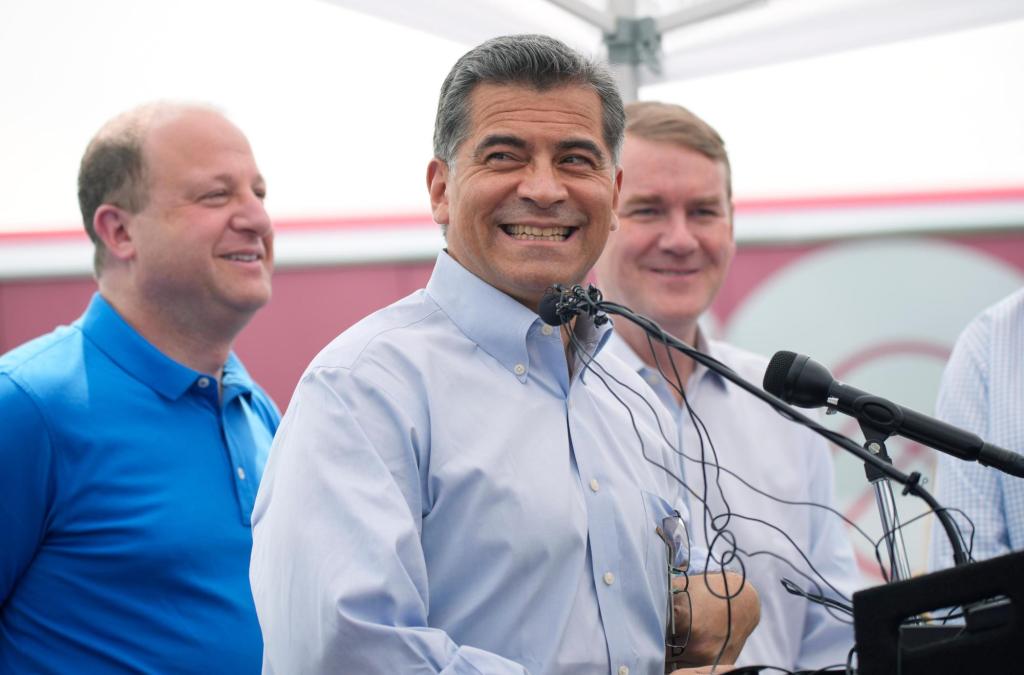 DENVER — U.S. Health and Human Services Secretary Xavier Becerra visited a mobile vaccine clinic near Denver on Friday to promote COVID-19 shots among underserved communities of color that have some of the nation’s lowest vaccination rates.

He also met with Democratic Gov. Jared Polis, getting briefly interrupted by the governor’s dog, Gia, and another dog dashing through their closed-door session, giving the two a laugh. They discussed the state’s pandemic response and a new law creating a state-administered health insurance plan designed to reduce premiums and costs of care as well as get more people covered.

Later, Becerra, the agency’s first Latino leader, and Democratic members of Colorado’s congressional delegation toured a mobile vaccine clinic focused on underserved communities in the Denver suburb of Aurora, which is nearly 30% Hispanic. It’s one of nine mobile units made from converted buses.

While Hispanic people make up 20% of Colorado’s population, less than 10% have been vaccinated, according to the state’s vaccine dashboard. Across the U.S., a lack of vaccine access and distrust of the medical field within minority communities has made it harder to vaccinate those populations.

Democratic Rep. Jason Crow, whose district includes Aurora, said many minorities and immigrants have trouble finding the time to get vaccinated while working multiple jobs, highlighting the need for the state’s mobile resources.

“Where you are, we will go. Donde tú estás, iremos nosotros,” Becerra said.

He asked Latino communities to identify trusted leaders to operate as vaccine “ambassadors” to convince those who are still hesitant. He reminded the public that the vaccine is free, noting that some may not believe there are no “gimmicks” attached to receiving the shot.

However, recent data from the U.S. Centers for Disease Control and Prevention shows that Latino populations have received a higher proportion of administered vaccine doses in the last two weeks, narrowing the disparity, the Department of Health and Human Services said.

Becerra also met faculty and students at the Metropolitan State University of Denver to hear about the effects of a grant his agency gave for behavioral health workforce training.

Becerra said the U.S. is “so far behind” on behavioral health services but that the pandemic has opened the door for the federal government to invest in mental health and substance abuse disorders.

“I think, to some degree, that taboo aspect of talking about it has dissipated,” Becerra told The Associated Press. “I think COVID really forced people to recognize that there are people who are really suffering from stress and beyond.”

The secretary’s visit included a discussion of the effects of President Joe Biden’s American Families Plan on communities of color. The $1.8 trillion program increases spending for early and secondary education, child care and paid family and medical leave.

Becerra talked about increasing access to the plan’s child tax credits with Deidre Johnson, CEO and executive director of the Denver-based Center for African American Health, which focuses on Black health disparities. About 90% of eligible families are automatically enrolled, but the administration is working with community leaders like Johnson to increase participation.

Qualified families will receive up to $300 per month for each child under 6 and up to $250 per month for children 6 to 17. The credit was previously capped at $2,000 and only paid out to families with income tax obligations after they filed with the IRS.

Becerra said his visit to Colorado highlights the Biden administration’s interest in partnering with states “where you see innovation and change” in lowering health care costs and improving access to affordable prescription drugs — measures state lawmakers passed this year.

Nieberg is a corps member for the Associated Press/Report for America Statehouse News Initiative. Report for America is a nonprofit national service program that places journalists in local newsrooms to report on undercovered issues.