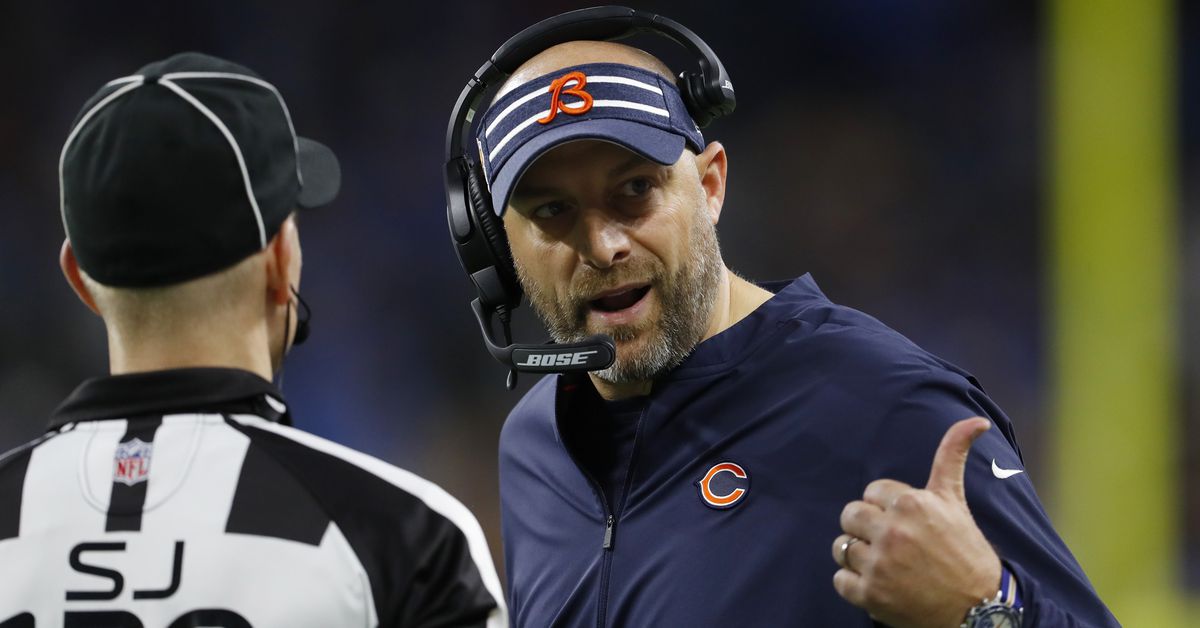 There’s an abundance of explanation and rationalization for the Bears’ offensive failures the last two seasons.

They can blame their quarterbacks, who have been among the NFL’s worst, or an offensive line that crumbled rapidly and has just two starters left from the 2018 team that won the division. Various skill players haven’t been what the Bears hoped for. Kicker problems haven’t helped.

But it would be an oversight to leave coach Matt Nagy off the list of problems. The Bears’ plunge isn’t something that has happened to him; he has been squarely at the center of it.

It got so bad for Nagy last season that he did the unthinkable and handed play-calling duty to offensive coordinator Bill Lazor. Despite a modest uptick after the change, Nagy predictably reclaimed that role this offseason.

It could be his last chance to show he’s up to the task.

The Bears hired Nagy to fix quarterback Mitch Trubisky and pump voltage into a fizzling offense. Since then, there has been a constant reshuffling of personnel, but the coach has stayed the same. While general manager Ryan Pace has tried to correct his errors by supplying Nagy with better quarterbacks (Andy Dalton and Justin Fields), skill players (tight end Cole Kmet and receivers Darnell Mooney and Allen Robinson) and — maybe — a sturdier offensive line, it’s time for Nagy to improve as well.

Asked what he’ll do differently after steering the Bears’ offense to the seventh-fewest points in the NFL the last two seasons, Nagy didn’t offer much.

“I’ll make sure that schematically, I’m putting our guys in the right position, working off of their strengths and what they do well,” he said, essentially restating his job description. “Every year is a little bit different, but you want to create an identity as fast as you can.”

He carried on for another minute or so, but mostly it was a jumble of coachspeak that didn’t reveal anything. He certainly has that part of the job down. If Nagy has done any self-analysis over the last few months, he’s not about to disclose his findings.

He should have had quite a bit to comb through after an 8-8 season that ended with a decisive loss to the Saints in the wild-card round of the playoffs. The Bears beat one team in 2020 with a winning record — the eventual champion Buccaneers, oddly enough — and continued their spiral on offense.

The Bears scored 26.3 points per game (ninth in the NFL) in Nagy’s first season, although that was boosted by an incredible defense. Without defensive touchdowns and takeaways that allowed the Bears to start drives already in field-goal range, that number would have been just 22.4.

Whether the Bears had a legitimately decent offense or merely a mirage is up for discussion. But there’s nothing to debate about how bad Nagy’s offense has been since.

The only positive is that the Bears have committed the 11th-fewest turnovers in two seasons, with 41 in 32 games.

Signing Dalton, developing Kmet and tweaking the offensive line won’t fix everything. Not even close.

When the Bears hired Nagy as a first-time head coach at 39, they did so because of the offensive expertise they believed he developed over years working under Andy Reid. Whether he could lead a team was yet to be seen.

So far, they’ve gotten the opposite of what they expected. Nagy has likability but not credibility. He seems to have maintained strong locker room support and mostly has been a good voice for the team publicly, but the Bears are still waiting on all those touchdowns.

He took the job knowing Trubisky was the franchise quarterback, and he couldn’t maximize him. He had a hand in trading for Nick Foles, and that went poorly — maybe worse. Now he swears by Dalton, saying he’s the No. 1 quarterback this season regardless of how quickly Fields progresses.

Quarterback flops. Offensive slop. How much more can he survive before the Bears lose faith? That’s the difference between Pace’s and Nagy’s job security. While Pace seems to have bought himself at least one more year by drafting Fields, it’s not necessarily true for Nagy.

No one expects him to produce an offensive juggernaut with this roster, but it can’t be another season of hoping to score 17 points and praying it’s enough. If he wants to stick around for the Fields era, he must give the Bears a reason to believe in him.