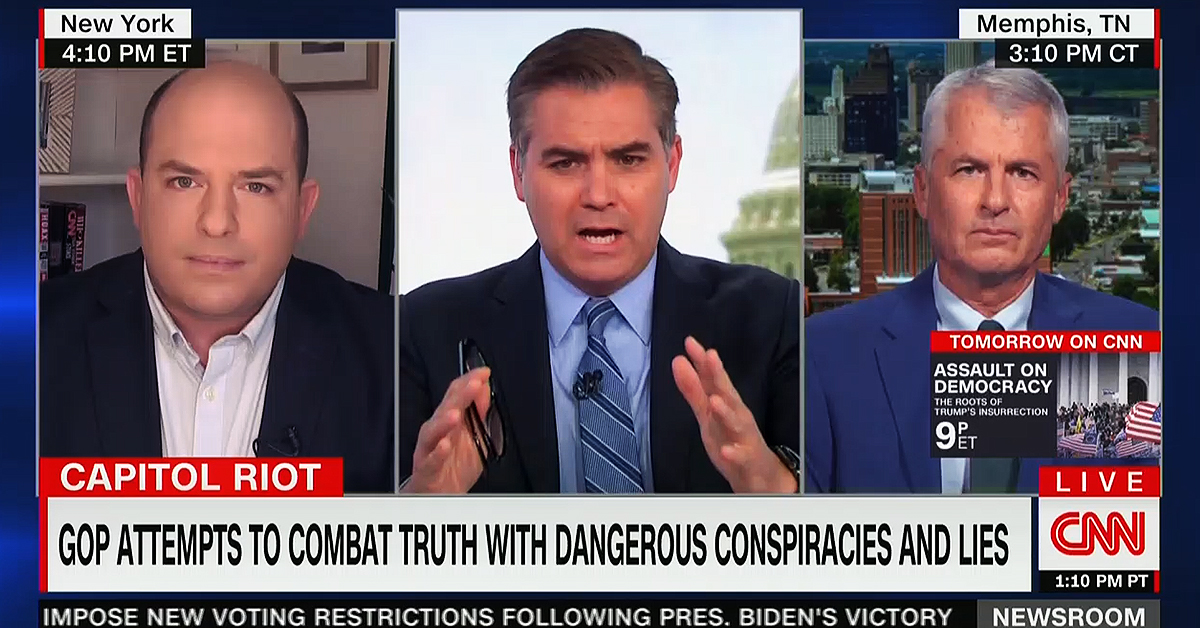 Jim Acosta hates to use the word bullshit, he said on Saturday, because he’s an “old-school guy.” But Fox News airs “crazy nonsense” so, we are to understand, he has no choice.

In the segment during Acosta’s highly opinionated, frequently Fox-focused, inaptly named CNN Newsroom, the discussion centered around conspiracy theories propagated on the rival network, particularly by opinion hosts like Tucker Carlson and Laura Ingraham. The prime example was Carlson’s repeated insistence that undercover FBI agents might be the unnamed co-conspirators listed in court documents that are part of the many prosecutions brought against the January 6th Capitol breach rioters.

Acosta introduced his guests, Stelter and CNN counter-terrorism analyst Phil Mudd, and then asked about the “just nutty” theories from Carlson, saying they are “getting stranger and louder by the day.”

“These ideas move from fringe web sites to Fox News primetime in a matter of hours, you know,” said Carlson. “No longer do ideas trickle out on the dark corners of the internet and take months or years to hit the mainstream. Now they hit the mainstream right away.”

“This was an inside job conspiracy theory, with absolutely no basis,” said Stelter, evoking the memory of 9/11 truthers. “Ultimately this is a failure of Fox News as an organization. Because if Tucker Carlson is out there spewing this nonsense as an opinion, he should back it up with the newsroom. The newsroom should go out and research it, investigate it, find the proof.”

“Of course they’re not doing that, because that proof’s not out there. It’s just a bunch of gobbledygook,” said Stelter. “In a real news organization it would be backed up by evidence, and documents, and none of that’s been happening. Which is a failure by Fox as an organization, Jim.”

Acosta took the ball then, serving notice to people who work on the Fox Television that they are essentially complicit — though he hates to say that, too.

Acosta expressed how hard it is to even understand where these conspiracy theories are coming from, because when you look at the videos from January 6th you don’t see any FBI or Antifa.

“I don’t see any FBI agents. I don’t see Antifa,” he said. “I just wonder, how is that people, how are they processing this video and thinking it’s somebody else?”

Mudd brought up 9/11 directly, then, saying that after the attack by Al Qaeda terrorists there was a lot of “anti-Muslim sentiment in this country, a lot of anti-immigrant sentiment.” He said it was former president George W. Bush who “kept a lid on that.”

Saying that leadership is what keeps the fringe out of the mainstream, he also invoked the memory of the late Senator John McCain, saying that a lack of leadership now is why conspiracy theories are becoming central to Republican politics.

Naturally that led to mentioning the GOP’s conspiracy-theorist-in-chief, Rep. Marjorie Taylor Greene (R-GA), who tweeted about “FBI operatives” being involved in “organizing and carrying out” the Capitol riots.

“This is a sitting congresswoman pushing these dangerous lies. You know, she pushes crazy lies about the Holocaust, and then she apologizes, and now she’s moved on to the other crazy lies,” said Acosta. “At what point does Twitter take her off the platform?”

The topic of removing people with bad opinions from having access to share them comes up frequently on CNN.

“That’s a very interesting spot for Twitter,” Stelter replied, “because this is the kind of thing that is, you know, it’s beyond fact-checking in a way.”

“Let me explain it this way. Let’s think about my 4-year-old daughter. When I’m putting her to sleep at night, if she claims there’s a monster under the bed, I can grab a flashlight, we’ll shine the light under the bed, we can see there’s no monsters,” said Stelter. “But this conspiracy theory is more like saying there’s a ghost in the closet, an invisible ghost. And it’s impossible to know if there’s actually a ghost in the closet. There’s no way to actually debunk that, right?”

“We’re in a world beyond fact-checking,” he continued. “And that’s where conspiracy theories thrive.”

These are points well-taken, and both Acosta and Stelter are right about the path from fringe blogs to primetime. And the fact that Fox News Channel’s reporting and investigative journalism wing doesn’t check on or back up Carlson’s theories is glaring.

Stelter’s remarks about fact-checking are especially pertinent in a media era where even fact checks require fact checks, and are often politically motivated. Would that CNN’s media analysis would turn its eyes toward home now and then, though.

I mean I hate to say it, but you don’t want to come off like hypocrites — I hate to use that word, but it’s just important people you’re hoping to inform believe you’re fair, credible, honest, very honest, professional, like really really honest, and impartial. I hate to say.

This is an opinion piece. The views expressed in this article are those of just the author.