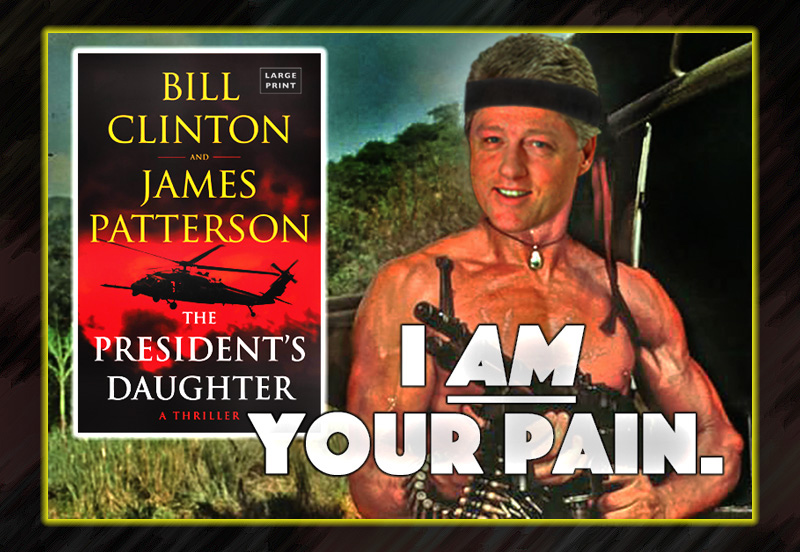 First and foremost, there are no sex scenes in former president Bill Clinton’s new thriller, The President’s Daughter (Large Print), coauthored with literary oligarch James Patterson. That’s a shame, given the disgraced president’s obvious enthusiasm for all things prurient. If Jimmy Carter can do it, Slick Willy can do it better. Write what you know, as the saying goes.

There is, however, an abundance of self-love embodied by the protagonist, former president Matt Keating, a childish fantasy version of the author himself. Keating is an ex-Navy SEAL whose only flaws are being too noble for politics and spending too much time volunteering—Rambo meets Harrison Ford in Air Force One. He is the antithesis of Clinton in almost every respect, with one glaring exception.

The absence of romance is explained by the fact that Keating, fresh off a humiliating primary defeat at the hands of his own vice president, is somewhat estranged from his wife, Samantha, a “snooty college professor” with a panache for crushing her enemies. With their lone child (the titular daughter, Melanie) heading off to college, Keating and his wife agree to “lead separate lives for the foreseeable future.” It may seem like “an odd relationship,” he concedes, but “the Ozzie and Harriet family of the 1950s is long gone.”

The back cover of this 755-page doorstop boasts one of the most ironic taglines in history: “Every detail is accurate—because one of the authors is President Bill Clinton.” No, seriously. But maybe they’re onto something.

Samantha carries herself with a “familiar steel showing through her smile for an old grudge” that she will “never, ever forget.” She is ready to move on from “those wasted hours and days and weeks being First Lady and pretending to care.” By the end of the book, she has exerted her dominance over Pamela Barnes, the backstabbing VP who went on to become the first female president in history, unlike a certain real-life politician who so desperately coveted that distinction.

As it so happens, Pamela’s husband Richard has been a very bad boy. When she’s informed of his (especially depraved) indiscretion, we are treated to a conversation that, in one form or another, definitely took place in the White House master suite circa 1998.

“There are sixteen bedrooms in this house,” she snaps. “Go find one.”

Write what you know.

None of this is particularly relevant to the plot of The President’s Daughter, which is only slightly more ridiculous than that of a typical Hollywood action film, as are the names: Trask Floyd, Randy Grambler, Coleman Pelletier, Bruce Hardy, Rollie Spruce, and so on.

Keating’s nemesis is Asim Al-Asheed, a Libyan terrorist and social media influencer. He’s hellbent on revenge after his family was killed in a commando raid that Keating ordered. Naturally, the terrorist sneaks into the United States with his jihad-curious cousin and kidnaps Melanie on a hiking trail in New Hampshire. That’s where Keating has been enjoying retirement (and his wife’s absence) by hosting poker nights with the boys.

Keating reacts exactly the way you’d expect a badass maverick to react. The woman president can’t be trusted, obviously, so Keating takes matters into his own hands—even if that means going all the way to Libya to hunt down the terrorist himself. The CIA, FBI, and U.S. military are perfectly adequate, he reckons, but lack a crucial ingredient: “A father who’s going to get the job done, no matter what it takes.”

What it’s going to take is a dream team of gung-ho (but also very discreet) Secret Service agents, Navy SEALs, and an on-the-spectrum NSA hacker who just happens to be a crack sniper. Plus a little help from Keating’s old friends in the Saudi and Israeli spy agencies. And guns. Lots of guns with “TAWS thermal sights,” and maybe some “MOLLE vests,” “IFAKs,” and “Motorola SRX 2200 single-band handheld radios.” Acronym enthusiasts will find a lot to love in this book.

The President’s Daughter will never be a Hollywood film, but that might be its most endearing quality. It is decidedly anti-woke, refreshingly problematic. Keating’s daughter, Melanie, is appalled by her Dartmouth classmates, whose “ignorance and apathy about the real world” enable them to “drone on and on about how the real roots of terrorism were poverty, despair, and inequality.” Characters pray to God and quote the Bible. Then there’s Jiang Lijun, the sadistic and openly racist Chinese intelligence officer who pals around with terrorists. Film studios would never tolerate it in its current form.

Not surprisingly given the book’s length and the garrulity of its author, there are a lot of unnecessary anecdotes posing as insight into the life of a president. Did you know that the Situation Room has more than one room? Did you care? Told from Keating’s perspective in the urgent present tense, they read like the internal ramblings of a madman. “Unlike what bad novels and even worse movies portray,” he dishes with authority, “former presidents and current presidents rarely make phone calls to each other, for the nation has only one president at a time.” Now you know.

Clinton’s history lessons about the Middle East, minus the part about his wife’s role in turning Libya into a haven for terrorists, will leave readers begging to return to the cheesy action. Even his rants against the media—a Clinton grudge that will never die—are tedious: “It’s a sad state of affairs when you eventually realize just how wrong journalists can be in covering stories.” He approvingly cites former Obama adviser Ben Rhodes’s assessment that most D.C. journalists “are twenty-seven years old, no real experience except for reporting on political campaigns, and they literally know nothing.” Indeed.

You can probably guess how the story ends. Among other things, the Chinese spy fails to accomplish anything, and ends up being poisoned by his fat boss. Keating brings the house down with a devastating joke about the Logan Act. He is reunited with his wife, but is in a good mood nonetheless. His phone is ringing off the hook. A bunch of publishers want to pay him millions to write a stupid book.