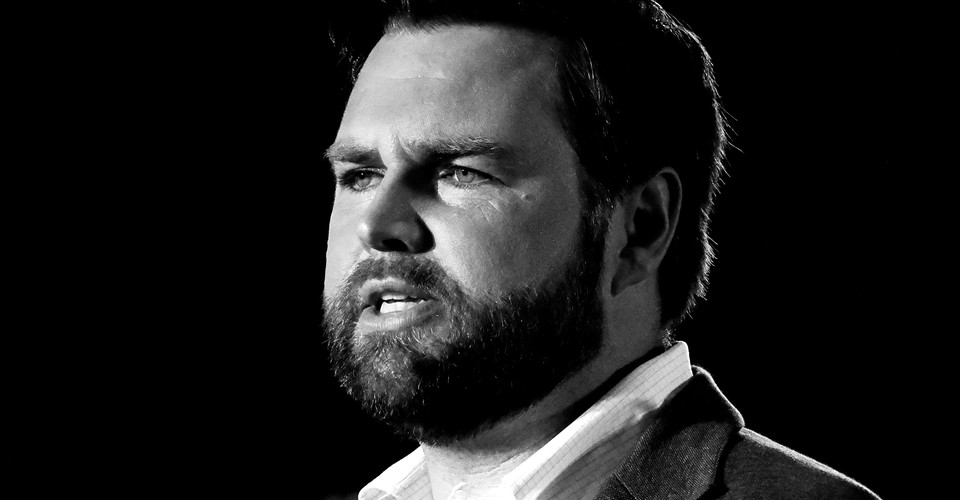 What do we call a man who turns on everything he once claimed to believe? For a practitioner of petty and self-serving duplicity, we use “sellout” or “backstabber.” (Sometimes we impugn the animal kingdom and call him a “rat,” a “skunk,” or a “weasel.”) For grand betrayals of weightier loyalties—country and faith—we invoke the more solemn terms of “traitor” or “apostate.”

But what should we call J. D. Vance, the self-described hillbilly turned Marine turned Ivy League law-school graduate turned venture capitalist turned Senate candidate? Words fail. His perfidy to his own people in Ohio is too big to allow him to escape with the label of “opportunist,” and yet the shabbiness and absurdity of his Senate campaign is too small to brand him a “defector” or a “heretic.”

My friend Preet Bharara, the former U.S. attorney for the Southern District of New York, tried to describe Vance recently and came up with “pathetic loser poser fake jerk,” but that is a lot of words. To distill the essence of Vance as a public figure, the word that enters my mind is an anatomical reference beginning with the letter a.

I do not use that word lightly or comfortably. I am, in the formal sense, a man of letters. I have been an officer of instruction at several institutions of higher education (and I remind you here that I do not represent any of them and speak only for myself). I would not advise my students to use the term.

But the word is apt when I consider Vance’s silly and yet detestable moral collapse. Some people back in Vance’s home region of Appalachia thought his memoir, Hillbilly Elegy, was hollow and inaccurate, but for a time, other people—including me—were intrigued by his writing and public speaking. Vance lived as a child in a steel town in Ohio and spent his summers in the hills of Eastern Kentucky, while I grew up amid the rotting factories of New England, solidly in the working class but not poor. I welcomed his willingness to cast a critical eye on his (and my) people, especially after years of conservative hand-wringing focused solely on the dysfunction of minority communities.

Vance gained early support in the political center, particularly among conservatives. The American working poor, no matter where they are, do in fact need civic representatives from the center-right, people who can talk candidly about the limits of government and who can make a moral case for tough love and personal responsibility, but one based on a sense of shared experience, common values, and genuine compassion. Someone like Vance could be that candidate.

Someone like Vance, perhaps, but as we now know, not Vance himself. Not so long ago, he talked about the self-defeating bias against education among poor whites. He acknowledged the self-destructive habits of some of the people he grew up around. Vance wrote, in this very magazine, that Donald Trump “is cultural heroin”—a powerful charge from someone who hails from the epicenter of the opioid epidemic—and provided a “quick high” that could not fix what ails the country. All of that vanished once Vance decided he wanted to go to Washington—and after the Trump supporter Peter Thiel dropped $10 million into a political action committee.

Instead of a truth-teller in his own community, Vance as a candidate has become a contemptible and cringe-inducing clown. His attempts at authenticity are so grating because they are so blatantly artificial. His recent tweets, for example, attempting to ingratiate himself with rural Ohioans by slagging New York City were embarrassingly amateurish; we can only wonder which social-media consultant thought them up. “Serious question,” Vance tweeted. “I have to go to New York soon and I’m trying to figure out where to stay. I have heard it’s disgusting and violent there. But is it like Walking Dead Season 1 or Season 4?”

When the Republican commentator Liz Mair called him on this inane fear-mongering, he responded that “these people”—which is everyone but him, one assumes—have no sense of humor about what he claimed was only a joke.

Again, this is why a certain word immediately springs to mind.

Worse, Vance has not only repudiated his earlier views on Trump, but has done so with ruthless cynicism, embracing the former president and his madness while winking at the media with a What can you do? shrug about the stupidity of Ohio’s voters. “If I actually care about these people and the things I say I care about,” he told Time, “I need to just suck it up and support him.”

Well. One can only imagine their gratitude now that Vance the wealthy venture capitalist has deigned to accept Trump as his political savior.

These incidents are not isolated missteps. The writer Tim Miller recently noted in The Bulwark that within the space of a week, Vance not only tweeted his performative fear of New York, he also “defended a Nazi from being kicked off of twitter … shared a thread defending election fraud conspiracies … fantastically claimed Google was ‘hiding’ his website” and “mocked reporters for saying they were traumatized by the Capitol riot.”

Vance’s rhetoric is even worse than Miller’s description. For example, Vance minimized Nick Fuentes, the leader of a white-nationalist group, by referring to him merely as “a giant troll” who should not have been kicked off Twitter by one of the “tech companies” that want to “control what we’re allowed to say in our own country.” And, more recently, he ventured onto the former Trump adviser Sebastian Gorka’s crackpot videocast to claim that the “Democrat” Party—a usage common among educated right-wingers trying for working-class cred—“is a party of childless people” who therefore do not value the future.

Vance has struck back at his many critics across the political spectrum by referring to them all as “degenerate liberals,” which is exactly the kind of thing a smarmy and pretentious asshole would say.

I apologize. I had hoped to avoid the word, but nothing else will do.

In fairness, Vance is hardly the most offensive Republican out there. He is no Louie Gohmert, the Republican congressman from Texas, or Marsha Blackburn, the senior Republican senator from Tennessee, people who create an electrostatic field of stupidity around themselves when they speak. Nor is he even the most craven candidate in Ohio; his primary rival Josh Mandel recently filmed himself burning a surgical mask in the name of freedom. The Republican Party is chock-full of such performative buffoons.

But what makes Vance so awful is that he knows better. His intentional distancing from his earlier views shows that he is fully cognizant of what a gigantic fraud he’s become.

I suspect that Vance is also reading his own press, which would explain why a young man who attained early fame is convinced that he can jump right to national office. Take, for example, the Trump-friendly columnist Henry Olsen of The Washington Post, who wrote that Vance scares America’s elites because “he hasn’t surrendered his mind to polls or to the donor class in an effort to fit in.”

But following the polls and capering to a jig played by rich donors is exactly what Vance is doing. His gooberish tweets, his recent declaration that the most important issue for Ohio is securing the southern border, his multimillion-dollar support from “ordinary folks” like Thiel—these all show that Vance is as mossy a creature as the swamp ever produced.

This hypocrisy makes him indistinguishable from other figures in American politics, such as Senators Tom Cotton and Josh Hawley, who are products of privilege and elite education and who now pretend to be tribunes of the Forgotten People. (Vance, predictably enough, has recently expressed his admiration for both.)

Vance, so far, is less of a hazard to American democracy than aspiring authoritarians like Cotton or Hawley. Nor does he seem to have developed the full dedication to being a soulless careerist like Elise Stefanik, the Republican congresswoman from New York. Mostly, he’s just a … well, you know.

Instead of a candidate who’s willing to speak hard truths to his people, Ohioans now have a native son who has returned to weaponize their resentment and cultural dysfunctions. His ambition is fueled by the money of others who would never deign to live in the Midwest. And like other populist charlatans, he has convinced himself that he should be anointed to lead the rubes out of their misery.

Vance would no doubt welcome terms such as populist, savior, native son. But when thinking of a plastic fraud trying to harvest their votes, poor and working-class voters might come up with a different word.