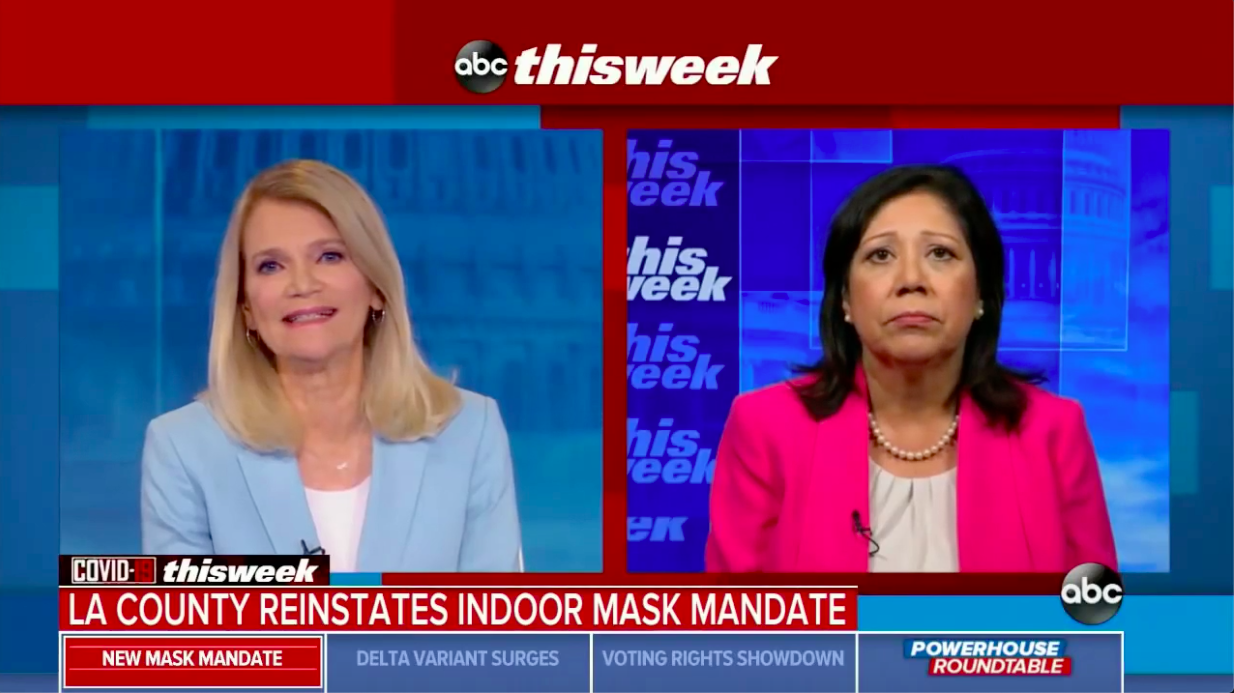 ABC News’ Martha Raddatz pressed Los Angeles County Board of Supervisors Chair Hilda Solis on Sunday about the decision to reinstate an indoor mask mandate in the county — even for those who are vaccinated — as Covid-19 cases tick up.

Raddatz noted that Solis supported dropping Covid restrictions just over a month ago, with knowledge of the Delta variant.

“When we look back in the last seven days, obviously a whole lot has changed,” Solis responded, later adding, “Almost a month ago, when all this was declared that we were opening up, the numbers weren’t that high.”

She continued: “In the last few days we’re up to almost 1900 cases and over 460 individuals that are in our ICU units. This is very disturbing and of course as responsible, elected officials we have to do something.”

Solis said she is “not pleased” to return to the mandate but “it’s going to save lives.”

Pushed by Raddatz to explain her reasoning for requiring masks for vaccinated people, Solis cited how a rise in cases would impact hospitals and the fact that children under 12 still are not eligible to get vaccinated.

“We as responsible adults should be taking a proactive approach and making sure we mask up and that we also get vaccinated as soon as possible,” she said.

Raddatz then asked how the mandate will be enforced, given that the Sheriff’s Department said they would not enforce it themselves as it “contradicts CDC guidelines.”

“Our public health department is typically the individuals that go out and do inspections so I don’t really see where the sheriff really has to come in and weigh in in the manner that he might have thought,” Solis said. And besides, he’s just saying he’s going to allow people to do what they need to do.

She added: “I’m not concerned about that. I think the public overall is smart enough to understand what is being said and how to protect themselves.”

The decision to require masking of vaccinated individuals comes despite evidence of the efficacy of the Covid vaccine, particularly at preventing deaths and hospitalization. An analysis by the Associated Press of May data from the government showed that 99.2% of Covid-19 deaths in May were those who were not fully vaccinated, and only 1.1% of hospitalizations were fully vaccinated.

According to the Los Angeles Times, 52.6% of the adult population in Los Angeles County is fully vaccinated and 60.1% has received one dose. The Centers for Disease Control and Prevention currently recommends that “fully vaccinated people can resume activities without wearing a mask or physically distancing,” except where required by law or local regulation.

Los Angeles Sheriff Alex Villaneuva has rebuffed the county’s reinstatement of the mask mandate saying “forced the vaccinated and those who already contracted COVID-19 to wear masks indoors is not backed by science and contradicts [CDC] guidelines.

Watch above, via ABC News.