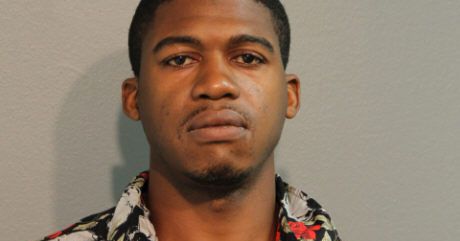 Bail was denied Sunday for an Army veteran who allegedly shot and killed a man after they took psychedelic drugs together this weekend and engaged in sex with a woman who witnessed the attack.

Tajh Moore, 31, of Robbins, was charged with first-degree murder in the shooting early Saturday in the East Garfield Park neighborhood, according to Chicago police and Cook County prosecutors.

The victim and witness, both 31, were doing errands Saturday when they picked up Moore and drove together to the woman’s home in the 2800 block of West Van Buren Street, Assistant State’s Attorney Jim Papa said during Moore’s initial court hearing.

Moore was in a relationship with the woman, who previously had two children with the man he allegedly killed, Papa said. The victim hasn’t been identified by the Cook Count state’s attorney’s office.

While at the woman’s home, they all had sex together after taking LSD, ecstasy or a cocktail of both psychedelic drugs, Papa said. Afterward, the group decided to go downtown to hit some bars.

Moore, who had a valid Firearm Owners Identification Card and a Concealed Carry License, was allegedly carrying a gun when the others picked him up, Papa said. The other man also had a gun, but he left it in the woman’s bedroom.

About 1:45 a.m. Saturday, as the woman was pulling a car out at the home, Moore allegedly shot the man once in the back of the head while he sat in the back passenger seat, according to prosecutors and police. The shooting was caught on surveillance video, Papa said.

After consoling the woman, Moore went into her bedroom, grabbed the victim’s gun and wiped it down, Papa said. Moore allegedly went back outside and placed the weapon near the man’s body.

Officers then arrived and took Moore into custody, according to Papa, who noted that he had never previously been arrested. His gun was allegedly found in the woman’s bedroom.

The woman made positive identifications based on still photographs taken of the surveillance video, Papa said. The examination of gunshot residue found on Moore’s hands hasn’t been completed.

Given the evidence, Papa urged Judge Mary Marubio to deny him bail.

Courtney Smallwood, Moore’s public defender, described her client as a U.S. Army veteran who was honorably discharged in 2018 after serving in South Korea. She noted that Moore now suffers from post-traumatic stress disorder.

Moore, the father of an 8-year-old child, has been working for Peoples Gas for over four years, Smallwood said. As she pressed for a cash bond, Smallwood stated that Moore hasn’t admitted to the shooting and noted that the victim was allegedly armed.

Marubio, however, sided with prosecutors and ordered Moore held without bail. While Marubio said she took into account Moore’s military service and lack of criminal background, she said her decision was also informed by the weight of the evidence against him and his alleged effort to plant a gun at the scene.

Moore’s next court date was set for Monday.