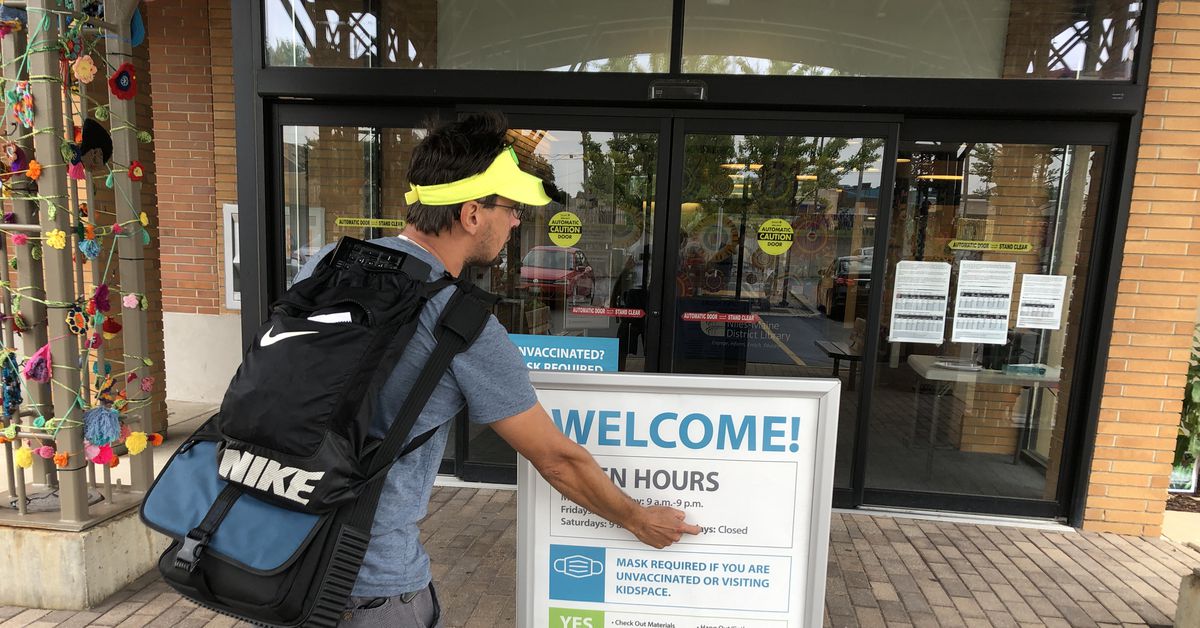 You never know what you’ll find at the library.

Strolling into the Niles-Maine District Library Friday afternoon, its entrance decorated with colorful yarn creations, I noticed the “HOT PICKS” shelf holding a copy of Isabel Wilkerson’s “Caste: The Origins of Our Discontents.”

I’ve been meaning to read that one. Grabbing the book, I settled into one of the comfortable blue chairs and read the first chapter, about the 2016 election.

“The election would set the United States on a course toward isolationism, tribalism, the walling in and protecting of one’s own,” Wilkerson writes, “the worship of wealth and acquisition at the expense of others.”

That’s the reason I came here. A reader alerted me to what he described as “the cabal of four right-wing library-haters who took control of the 7-member Niles Library board, pushed out the executive director, and are slashing the budget, slashing the hours, cancelling orders for new books and a new roof. They especially don’t want any foreign-language books because people oughta learn English.”

Can that be true?

“It is,” said Niles Mayor George D. Alpogianis. “What they’re asking for, in my opinion, is ludicrous. Big politics are starting to trickle down into smaller communities and are now hitting our libraries. The library has always been a safe haven. I have five children, and we’ve spent hundreds of hours in the library. We’ve always felt good about it.”

Many Niles residents aren’t feeling very good about their library lately. Like all local issues, the complexities and personalities involved can be numbing.

The basic situation seems to be four board members applying a Reaganite kill-the-beast approach to their local library, throwing out anything that isn’t about stacking books in a room — no yoga for seniors, no librarians visiting schools. A bare-bones library run by people who hate libraries and hate most of the people they serve.

Three board members walked out of a board meeting June 30 to deny a quorum.

”The board is not working together at the moment,” trustee Becky Keane-Adams said. “There is complete separation, four to three. Of those four, three will not respond to me.”

Library board president Carolyn Drblik did reply to my query, with a brief lecture about how to do my job.

“False statements should never be the basis of news,” Drblik wrote. “I welcome a factual exchange of information with you and anyone else interested in reporting truthfully about our library.“

The factual exchange that Driblik welcomes apparently does not involve her actually talking to reporters, however.

The board is supposed to meet again Tuesday, July 20.

Elections were in April. During a candidate forum in March, someone asked Joe Makula: “Our neighbors speak over 90 languages, represent many different races, ethnicities and religions … How will you ensure that the library remains a place that is welcoming and supportive to everyone?”

He replied: “We should concentrate on people learning English because that’s the language here.”

“Seventy percent of our citizens first language is not English,” Alpogianis said.

As is typical of local elections, few Niles residents bothered to pay attention or vote.

Setting “Caste” back on the shelf for others to enjoy, for now, I strolled down to the basement, where Suzanne Wulf, head of digital services, instantly identified me as someone interested in the library and volunteered to show me around, starting with the Creative Studio.

“It’s been very popular post-pandemic,” she said, pointing out its 3-D printer, laser cutter, T-shirt maker and embroidery machine. A whiteboard listed various small costs for craft materials — a button is 25 cents. She said trustee Makula was especially interested in the fees.

There is a special area only for kids; several students were bent over their reading.

“This is the space for teens. It’s very popular,” Wulf said. “If it gets cut, where do the kids go?”

”I enjoy it. It’s a good library,” said Nick Mazur, a construction worker. He led me over to a board advertising the hours and pointed out the library is now closed on Sundays.