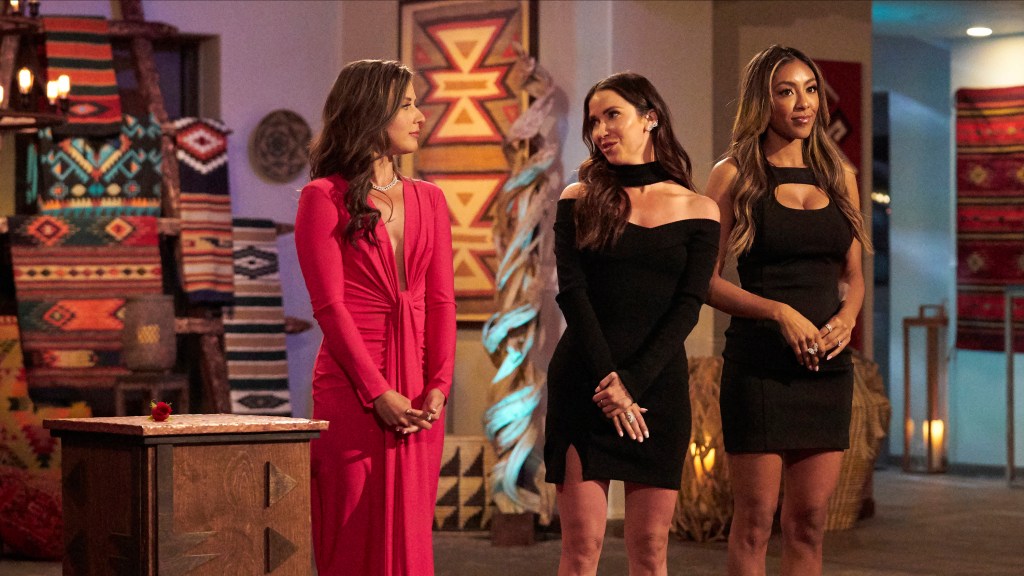 SPOILER ALERT: Do not read if you have not yet watched the July 19 episode of “The Bachelorette.”

Katie Thurston was tasked with narrowing down her “Bachelorette” suitors from seven to four in anticipation of next week’s hometown dates.

Katie strategized on how to distribute her dates but ultimately decided to reward Greg with a second one-on-one (making him the first contestant of the season to receive multiple individual dates). Mike received his first one-on-one, and the group date was split between the others.

The men — especially Brendan, who became the only remaining contestant who hadn’t received his own date — were envious of Greg for his additional time. Despite the jealousy, Greg managed to enjoy his time with Katie, who played homage to her hometown of Seattle with setups of Pike Place Market, the Seattle gum wall and Seahawks football.

After a day of touring her makeshift city, the two settled for a quiet dinner, during which Katie expressed her concerns about Greg. “If I’m being honest, I feel like you’re gonna leave,” she said.  “I see how you get during these group dates. It scares me. Today I just hope you felt what I felt and can feel more confident in what we have.”

He admitted to his insecurities in the competition, but reiterated his commitment to Katie and that he’s falling in love. She solidified his invitation to hometowns with a rose.

Before the next date, Brendan went directly to Katie’s suite to ask why he hadn’t received a one-on-one. She explained that other relationships were further along and that their connection was incapable of catching up in the limited time. She eliminated him then and there, and he did not attend the next day’s group date.

The four who did were greeted with an art exhibit of female anatomy. The group date attendees were then challenged to create their own art, communicating their feelings about Katie. Michael made a suggestive sculpture, Justin painted a rose surrounded by stick figures, Andrew drew sushi (“She loves sushi and we love to eat food together,” he said), and Blake’s art was too explicit for television and was blacked out entirely.

The evening portion was a further continuation of the day, and each man took the time to reassure Katie in their relationship. Blake said he wasn’t in love yet, but was “so in” and considered it “inevitable.” Justin presented her with another painting and they shared a steamy make out. Andrew told her he was falling in love and offered to forgo his career as a professional European football play to trade in for stateside stability.

But Katie rewarded Michael with the rose after he spent their conversation discussing his role as a parent to his son James. “Every time I give you a rose, I’m also giving it to James,” she told him. “He’s part of the picture.” Michael was locked in for hometowns.

The last date of the week went to Mike, who stood out as the season’s only virgin. Katie admitted that she “didn’t think [she’d] ever date a virgin” but invited him to a cuddle-focused date.

Their date was guided by Cuddle Queen Jean, and they strengthened their connection through physical touch. Despite the strides they made in their relationship, it was too little, too late: Katie sent Mike home before dinner, citing better relationships with other men.

With two men eliminated and two spots already claimed, Andrew, Blake and Justin were competing for the remaining two hometown invites. In a tense rose ceremony, Andrew was eliminated.

Katie was visibly upset at the elimination, crying to Andrew during their breakup conversation. She acknowledged that she wasn’t sure she was making the right decision and expressed how hard it was to let him go. Her emotions even carried over to the next morning long after their goodbye, when she was still unsettled in her hotel suite.

During her next-day processing, Andrew stopped by her room for a proper goodbye. “I think it would be a terrible shame if I were to leave this place and us not have a smile on our face,” he told her.

Their second goodbye had similar tones to their first, with an undercurrent of sadness and uncertainty. But during their conversation, Andrew was gracious and thanked Katie for the experience despite his exit.

On his way out, he slipped a handwritten note to Katie: “If you change your mind… I’ll be waiting.” Overcome with emotion, Katie chased him down the stairwell and ran back to him. In an passionate reaction, she asked him to come back and stay, which he declined.

“I want my future wife to choose me,” he said. “And, you know, I wasn’t chosen. So I had to say no. I don’t want to go through this with her again. I don’t want to be standing at a rose ceremony, waiting for her to not choose me.”

With Andrew’s official exit, Michael, Blake, Justin and Greg will head to hometowns.

“The Bachelorette” airs Mondays at 8 p.m. on ABC.