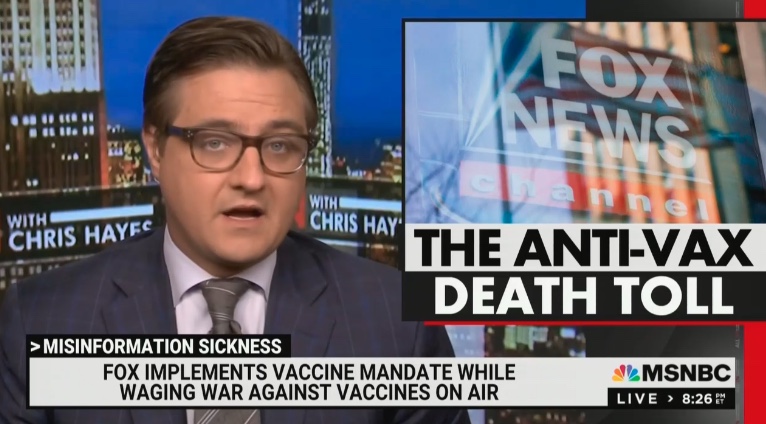 Chris Hayes ripped Fox News on Tuesday for airing numerous segments calling into question the safety and effectiveness of the Covid-19 vaccines. The MSNBC host noted that states that voted for Donald Trump have been lagging behind states that voted for Joe Biden in vaccination rates, and said this is being driven in large part by conservative media, especially Fox News, whose hosts Hayes said are engaged in “nihilistic cynicism and preening idiocy.”

He said we are seeing “a kind of radicalization of the American right against vaccination.”

He played a montage of clips from Fox News featuring people on the network casting doubt on the vaccine’s effectiveness or suggesting the nationwide vaccination campaign is somehow nefarious. In the past few days, some Fox News hosts have encouraged vaccinations, while others have continued raising questions about the vaccines. Hayes cited a Media Matters report from last week stating, “Fox has undermined vaccination efforts in nearly 60% of all vaccination segments in a two-week period.”

Moreover, Hayes said that “it is almost always done in the most cowardly way imaginable.”

“It’s not, ‘Don’t get vaccinated.’ It’s, ‘We’re just asking questions. We don’t take a position. Don’t take medical advice from people on TV. They’re trying to get you to comply, so you should not comply.’ It’s like, anti-pro-vax.”

“Fundamentally, the dominant perspective of that network from the beginning of the pandemic has been, ‘Who cares if all of those people die? They’re old, poor, or sick anyway,’” he added, before noting that Fox News founder Rupert Murdoch received the vaccine.

Hayes addressed the issue that many schools and businesses are grappling with: how to keep students and employees safe.

“One answer is just make sure people are vaccinated,” he said. “That’s precisely the kind of policy that Fox News has been rallying against, the heavy hand from above telling you what to do. ‘Vaccine passports.’ So you might be surprised to learn that’s exactly what the bosses at Fox are doing with their own building because they do understand the dangers of the situation, the nihilistic cynicism and preening idiocy of its hosts notwithstanding.”

Hayes then described the vaccination policy of Fox Corporation, which applies to Fox News. While employees aren’t required to be vaccinated, those who aren’t must wear a mask and practice social distancing while the office. Employees who are vaccinated must enter proof of such into the company’s human resources system to receive a “Fox Clear Pass.”

Watch above via MSNBC.