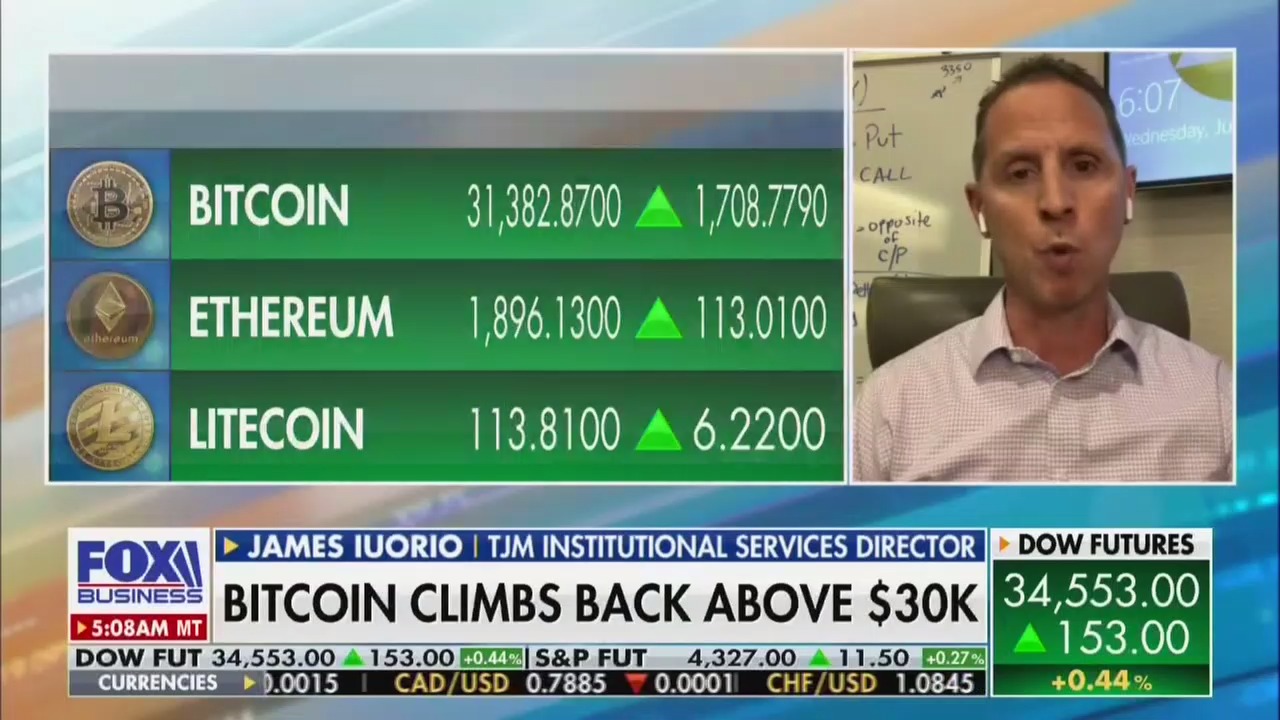 Bitcoin surged on Wednesday above $31,000 after a brief dip below $29,000, fueling debate among cryptocurrency traders who wondered if the shift presaged a journey to new record highs or whether it would become a fleeting stop on the way down.

“There’s a couple things I’m impressed with about this move,” TJM Institutional Services Director James Iuorio said in a morning interview with Fox Business Network’s Maria Bartiromo. Citing moves to regulate cryptocurrency by Turkey and the European Union, Iurio said, “Crypto’s had to deal with quite a bit of stuff. They had to deal with massively over-the-top positioning and regulations … so I thought there was going to be this big move, [and] $30,000 was the big psychological level. It’s back above it. If it goes above $32,050 and it stands there, I would think this move is over.”

Bitcoin has spent approximately 90 days in a bear market — defined as a drop in price of 20 percent or more — since it reached an all-time high of more than $64,000 on April 14, according to a quarterly report by CoinDesk, making it the currency’s third-longest bear market on record.

Taking a more contrarian view than Iurio, CoinDesk Managing Editor Lawrence Lewitinn insisted in a morning appearance on CNBC that cryptocurrency would suffer unless the Chinese government reversed its hostile stance and embraced it. The country took measures in June to stop cryptocurrency mining within its borders and reminded financial institutions that an 8-year-old law prohibited them from facilitating cryptocurrency transactions.

“It might be just buying because the prices were below 30 and you have technical buying,” Lewitinn said, discounting bitcoin’s sudden surge. “You might have some interest coming in, people saying ‘Oh, there might be an announcement.’ … But overall, it’s not going to overcome this lack of retail buying coming out of Asia that was there months ago. It’s a real problem that bitcoin has right now.”

Cryptocurrency traders with large followings acquired thanks to prescient market assessments mostly — if cautiously — disagreed with Lewitinn’s assessment. “Bottom is in,” the pseudonymous “RookieXBT” wrote on Twitter on Wednesday.

i’m gonna stick by and double down on this

if i’m wrong, it wouldn’t be the first time i’d lose alot of money – definitely won’t be the last

i live and die by my conviction https://t.co/rJ6sHpZfc7

“There’s not doubt in my mind that there’s too much money coming in for crypto to just go in a multi-year bear market,” wrote another pseudonymous trader, “Altcoin Psycho.” He added, “But how about we reclaim a few key levels before breaking out the bull tweets, yea?”

There’s not doubt in my mind that there’s too much money coming in for crypto to just go in a multi year bear market.

But how about we reclaim a few key levels before breaking out the bull tweets yea? pic.twitter.com/brkoYtGDLP

The price action came the same day Tesla and SpaceX CEO Elon Musk, Twitter CEO Jack Dorsey, and Ark Invest CEO Cathie Wood were expected to speak at “The ₿ Word” bitcoin conference, an event market-watchers anticipated with bated breath. The three oversee at least $1.5 billion in cryptocurrency or investment funds related to it — held individually or through their companies — and have been known to move markets.

Wood’s firm alone purchased another $14.4 million in shares in cryptocurrency-trading platform Coinbase, and $53.7 million in stock in Dorsey’s payments company, Square, as recently as Friday. Dorsey previously announced plans for the company to build a bitcoin hardware wallet.

“One of the shot in the arms [bitcoin] got was that Cathie Wood came back in and bought a bunch more crypto,” Iurio added. “The religion of these holders is just amazing to me. I work with some of these crypto people, and they’re crazy. And we haven’t got to the point where they changed their mind. That’s impressive to me.”

Watch above via Fox Business Network.