Investors may hope that the biggest financial experiment and debt bubble in history will last another 100 years. And they can pray that the currency system which has lost 98% of its value in the last 50 years will last another half century.

But that would be investing on a wing and a prayer with extremely poor odds of success.

Since neither the wing nor the prayer is likely to save investors from the greatest economic and financial collapse in global history, the need for protection or insurance is vital.

We are of course looking at probabilities and not certainties when we evaluate the risk of catastrophe.

With virtually all asset markets – stocks, bonds and property – at all time highs, investors are clearly judging the risk of failure to be nearer zero.

Personally I judge the risk of a collapse of markets and the economy to be between 95% and 99%.

So a risk range from 0% to 99% is quite a spread. An actuary would probably pitch it at 1 to 5 percent risk and sell catastrophe insurance on that basis.

With both investment markets and the insurance industry evaluating risk as virtually non-existent, that is the time when insurance is really underpriced or in simple terms dirt-cheap.

So what kind of insurance are we looking at here. The conventional investment market will look at hedging financial risk in all kinds of complex financial instruments in the form of derivatives.

What the so called “experts” don’t realize is that they hedge their investments with the same instruments that created the risk in the first place, such as paper gold. This would be a real financial tautology.

Or in other words: RUBBISH IN – RUBBISH OUT.

Financial tautologies are often the demise of investment markets, especially when derivatives are involved. The 2006-9 Great Financial Crisis was caused by a chain of interdependent derivatives that at the end of the day proved totally worthless.

Coming back to insurance there is no better time to buy it than when the market underestimates or doesn’t understand the risk.

It is obvious that it serves no purpose to buy the insurance in the same fake  instruments that in themselves represent the risk. So why buy paper gold?

Insurance That Withstands the Test of Time

Instead of buying insurance protection in the same form as the risk itself, the insurance must be an uncorrelated asset. It must also be an asset that has withstood the test of time and held its value and purchasing power throughout the ages.

physical gold is clearly the best combination of wealth preservation and insurance compared to any alternative and that by a massive margin.

At the beginning of the 2000s we decided to invest in physical gold in a substantial way for our own funds and the investors we advised. Since the 1999 bottom, gold was then stabilising and at the beginning of 2002 we considered that the 20 year correction was over and we bought gold at $300.

At the time, central banks were selling gold, including the bank of England and the Swiss National Bank which both sold a major part of their holdings at the very bottom.

When the tail wags the dog, the dog is in a state of disequilibrium that is transitory.

This type of imbalance can only last for a limited period or the dog will not survive. There  are two options; either the dog will take control of his tail or shed it. The tail cannot survive without the dog’s body whilst the dog can cope very well without a tail.

The gold paper market pretends to be backed by physical gold when in effect it is gold in sheep’s clothes.

It is like putting a Rolls Royce badge on an 1950s model Skoda and charging a Rolls price for it.

So we are looking at paper gold market which is corrupt and fake. It exists for the benefit of central banks, the BIS (Bank of International Settlement) and bullion banks.

In the short term, the paper gold market certainly harms the only genuine gold market which is physical. But artificial markets or instruments have never survived in history. Just look at the fact that every fiat currency in history which has failed.

And so will paper gold. It is only a matter of time.

The sheer volume of paper gold trading reveals the desperate pressure this market is under.

Gold trading by LBMA banks and futures exchanges amounts to $180 billion per day.

This is a staggering 350X the daily gold mine production.

So we ask ourselves how a dog can function properly with a tail that is 350X bigger than his body? The simple answer is that he can’t. I do realise that this is a slight oversimplification but nevertheless it does highlight how absurd the gold market is today.

The only reason why gold trading volumes are totally out of proportion to the actual amount of physical gold available is that 99% of the gross trading activity is in the paper market.

Central banks supposedly hold 34,000 tonnes or $2 trillion of physical gold. Since most central banks never do a full physical audit, verified by external auditors, no one knows how much gold they actually possess.

It is likely that at least half or 17,000 tonnes have been leased to the market or covertly sold. The part which is leased is unlikely to ever come back in physical form. The gold is lent by a central bank to an LBMA bank which in its turn sells it to a buyer in say China or India. The buyer will never return the gold which he now owns outright.

The central bank has an IOU from the bullion bank. But that piece of paper is not worth more than the paper itself. There is more than 100X paper gold issued by the LBMA banks than physical gold held by them.

That kind of imbalance is a recipe for disaster. So when the market asks for physical delivery they will be staring at empty vaults and computers full of zeros representing worthless paper gold.

At some point in the next few years, that will take the paper gold market to zero and physical gold to unimaginable levels. It would also lead to FreeGold which I discussed in my previous article.

Buying Insurance Must Not be Finessed

I don’t know anybody who waits to buy financial insurance until the day before the fire.

Since gold is critical financial insurance, the purchase should not be timed until the risk occurs.

The whole purpose with physical gold is that you buy it and forget about it. You mustn’t try to finesse the buying to get a “good deal”. We have seen many examples of investors waiting for a certain level lower than the market and when the price doesn’t get down there, they miss the boat altogether.

Gold is Much More Than Insurance

In times of high risk in investment markets, gold, as I have explained above, is the best insurance available. But the beauty of gold currently is that it is not just the perfect insurance but also a superb investment.

When an asset is undervalued and unloved as I discuss above, it is the most opportune moment to acquire it.

The graph below is one of my favourites and should really be included in every single article I write in order to, in a simple picture, explain to investors and wealth preservationists that gold is as cheap today as it has been in the last 50 years. 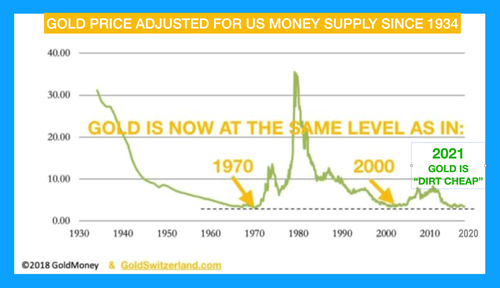 The graph above shows gold in relation to US money supply.

So this graph tells us that the gold price has in no way reflected the irresponsible management of the US economy or the total failure of US monetary policies.

Gold is a truth teller. It reveals the total mismanagement of the economy as the gold price rises due to the continuous debasement of all currencies.

No Fiat Currency in History Has Survived- THE DOLLAR IS NEXT

Since no currency has survived in history in its original form, it won’t happen this time either. Fiat currencies have a perfect success record. At every point in history they have without fail succeeded to self-destruct into oblivion.

It couldn’t be clearer than that. If governments and central banks have destroyed every single fiat currency since time began how can anyone believe that it will be different this time?

History gives me total certainty and confirmation with this prediction.

Let’s look at the major currencies in this since the latest corrupt currency system was set up in 1913.

The graph below, shows the dollar, mark/euro, pound, yen, since the early 1900s.

So here we have the four biggest currencies for the last 100 years all showing the same pattern. Without exception they are all down 97-99%.

The big fall for the dollar and euro took place after 1971. They are down 98% and 96% respectively since Nixon decided to “temporarily” close the gold window. 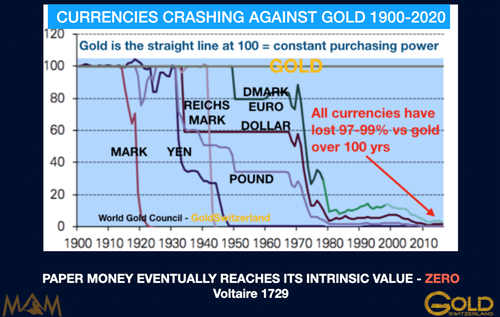 The final few percent fall is not in doubt. It is only a question how long it takes.

As the graph above shows, gold (at the 100 line) is eternal money and constant purchasing power. Gold is therefore the perfect antidote to a chronically defective monetary system.

Still, we all enjoy to sometimes measure gold in continuously debasing paper currencies.

Technically gold is now finishing a big Cup and Handle pattern which projects around $3,000 as the next target. 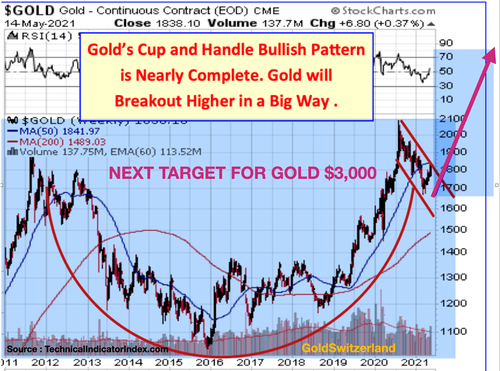 I Am Standing On a Soap Box

So why do I go on about currencies and gold in article after article. Critics could blame me for promoting our own activities. Few would know that we set up the best system for wealth preservation in the form of physical gold 20 years ago for our own funds and not as a business. The business only started a few years later as a result of demand.

The reason why I am passionate about informing the world of the destiny of their money and savings is that so few grasp how much they stand to lose in coming years.

It is obvious that investors feel confident after the biggest bull market in history in virtually all asset classes. Most investors are today “Masters of the Universe” (Bonfire of the Vanities) and therefore overconfident of the resilience of their bubble assets.

This arrogance is very dangerous and means that less than 0.5% of investors hold protection in the form of physical gold. And that is why I week after week stand on my soapbox to communicate the risks in the system that 99.5% of investors are neither aware of and nor protected against. The good thing is, as I show above, that gold on a relative basis is as cheap today as in 1971.

So today gold (not paper gold) is not just vital insurance and wealth preservation but also the investment opportunity of a lifetime.