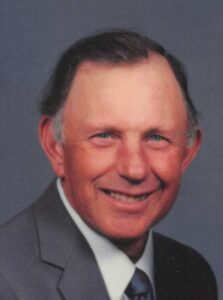 He was born January 12, 1932 in Gothenburg, NE, son of Hilding and Hanna (Nilsson) Pearson. Willard graduated from Gothenburg High School in 1949. In 1954-1955, Willard served in the 76th Engineer Battalion of the 34th Regiment in the United States Army during the Korean Police Action. After his honorable discharge, he returned home to farm and ranch with his dad in Wild Horse Valley by Brady, NE. On. August 7, 1960, Willard and Esther Carolyn Foster were united in marriage and they were blessed with four children, Mary, Richard, Edward, and Ruth. During their marriage, Willard and Carolyn continued to live on the farm raising their four children: and welcoming six grandchildren. Willard and Carolyn enjoyed 53 years of wedded bliss until Carolyn went to be with the Lord in 2013. Willard lived on the ranch from 1943 until entering the Veterans Home in March of 2022.

Willard was known for his humor and kindness. He always answered the question, “How are you?” with “I am good-looking”. Willard was always willing to help out a neighbor in need and enjoyed visiting with anyone he came in contact with. He had a strong faith in Jesus Christ and love for his family.

Services will be held at Fort McPherson National Cemetery, August 1, 2022 at 10:00 am with Pastor Robert Litzenberger officiating.

Memorials may be given to the Gideon’s, Cure Alzheimer’s Fund http://www.curealz.org.

3 mins ago
Generated by Feedzy