NASA released the latest image from its James Webb Space Telescope on Tuesday, showing tens of thousands of young stars in a stellar nursery dubbed the “Cosmic Tarantula.”

The nebula, located 161,000 light-years away, is the largest star-forming region of all galaxies close to the Milky Way.

Radiation from young stars, which glow pale blue, has hollowed out a cavity in the nebula that can be seen in the center of the image.

“Only the densest surrounding areas of the nebula resist erosion by these stars’ powerful stellar winds, forming pillars that appear to point back toward the cluster,” NASA explained. “These pillars contain forming protostars, which will eventually emerge from their dusty cocoons and take their turn shaping the nebula.”

Astronomers have long studied the Tarantula Nebula, which got its namesake due to its resemblance to a burrowing tarantula’s home, but Webb’s Near-Infrared Camera brought it into clearer focus than ever before.

It’s the latest revelation about the universe revealed by Webb, which is orbiting 1 million miles from Earth.

The telescope can capture infrared radiation to get a new view of planets, stars and galaxies, as well as the first-ever direct image of a planet outside our solar system. 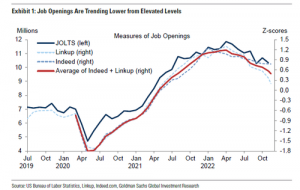