A new poll released by the Washington Post shows that 63% of American adults surveyed support banning the consideration of race during college admissions.

When asked, “Would you support or oppose the Supreme Court banning colleges and universities from considering a student’s race and ethnicity when making decisions about student admissions?” 63% of respondents said that they support banning the practice, and 36% said it should stay in place.

More than 60% of White, Asian/Pacific Islander, and Hispanic respondents support banning the consideration of race in college admissions, while 47% of Black respondents say that colleges should be allowed to consider race during admissions.

When the respondents were asked if they think “programs designed to increase the racial diversity of students on college campuses are a (good thing) or a (bad thing),” a majority responded that the programs are good.

Sixty-four percent of respondents responded that the programs intended to increase racial diversity of students on college campuses are a “good thing,” while 36% said they are a “bad thing.”

George Mason University associate professor in the Schar School of Policy and Government Justin Gest told the Washington Post the results seem to suggest that universities promote diversity without discriminating by race.

“So the message to universities seems to be: Cultivate and champion diversity without discriminating by race and ethnicity,” Gest said.

The polling was conducted from Oct. 7-10 and was released on Saturday.

Chloe Teachey, a Campus Reform correspondent and student at the University of North Carolina-Chapel Hill, whose mother immigrated from Vietnam after the Vietnam War, said that she’s disappointed in her university.

“As the daughter of an Asian immigrant, I am particularly disappointed that my university, UNC-Chapel Hill, hypocritically claims to promote diversity while taking away chances from Asian Americans,” Teachey said. “UNC’s discrimination against hardworking students in the name of diversity is disappointing.”

Teachey also said that one can oppose affirmative action without opposing diversity, echoing Gest’s analysis on what the polling suggests.

“Eliminating affirmative action does not mean opposing against diversity. Universities should base admissions decisions on academics and extracurricular activities, not skin color. There are other ways to promote diversity within the merit system,” Teachey said. “Affirmative action may sound like a positive policy for universities to have, but it is discrimination. The term tries hides its discriminatory practices behind the concept of diversity.”

Supreme Court Justice Ketanji Brown Jackson said she is recusing herself from Students for Fair Admissions v. President and Fellows of Harvard College because she is on the Harvard Board of Overseers. 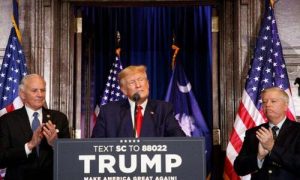