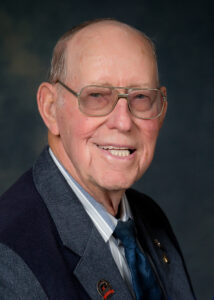 A Funeral Service for Ray D. Winz will be held on Thursday, July 28, 2022, at 10:30 a.m. at the First United Methodist Church in Holdrege, Nebraska, with Pastor Rhonda Wulf officiating. Following the service, Masonic Rites will be provided.  The funeral service will be livestreamed with the First United Methodist Church of Holdrege.  https://www.youtube.com/channel/UCZKIBk_wDkgeBBpmAYsfziw

A graveside service will be held at 1:30 p.m. at the Freewater Cemetery in rural Harlan County, Nebraska.

Ray Douglass Winz, 88 years of age, of Holdrege, formerly of rural Ragan, Nebraska, went to dance in Heaven on Friday, July 22, 2022, at Bethany Home in Minden, Nebraska.  Ray was born on May 21, 1934, North of Republican City, Nebraska, in Harlan County, Nebraska, the sixth of seven children, born to William Benjamin and Cora Mae (Barnes) Winz.  Ray grew up on the family farm near Huntley, Nebraska, where he attended grade school.  He graduated from the Ragan High School with the class of 1951 and served with the Army National Guard, in the Reserve Capacity, for nine years.

Following his education, Ray farmed with his father for several years.  He was united in marriage to Mary “Nadine” Kramer on November 24, 1954, at her parent’s home near Ragan.  They were blessed with three children:  Becky, Douglas, and Steven.   The family made their home in Ragan for ten years until Ray took over his parents farming after their retirement.  In 1980, they moved to the farm southeast of Holdrege.

Ray was involved in many areas of the community, including serving:  as a Master of the Masonic Lodge in Wilcox, Nebraska, and Holdrege, and recently received his 60 year member pin; six years on the Nebraska Farm Bureau Board; as the President of the Nebraska Charolais Association; as a Ragan Wranglers 4-H Club Leader for 20 years; and as the CO-OP President for Ragan and Midland for a total of 19 years.  Ray was also a Federal Land Bank Board of Director, Ragan School Board Secretary, Ragan United Methodist Church Board and Chairman of the Church Administration; member of the Tri-Basin Natural Resource District Board, for 24 years; and member of Governors Republican River Basin Council.

In 1964, Ray became the first rancher in the area to raise purebred Charolais cattle.  Ray was proud to be a 70-year member of the Ragan United Methodist Church and enjoyed teaching Sunday school.  Ray also enjoyed attending auctions, country music festivals, and dancing the night away with his beautiful wife, Nadine, at the Miller Dance Club for over 40 years.  Ray was very patriotic.  He observed Decoration Day and the Fourth of July seriously.

A memorial has been established in Ray’s honor and kindly suggested to the Ragan United Methodist Church, the Phelps County Senior Center, or the Miller Dance Club.

10 mins ago
Generated by Feedzy