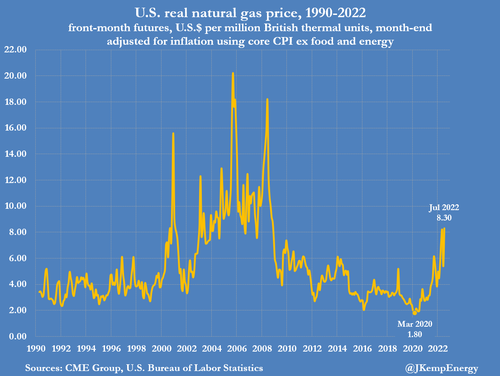 U.S. gas prices have climbed to their highest seasonal level for 14 years as hot weather and demand from electric generators has coupled with strong exports to Europe to keep inventories below the pre-pandemic average.

In real terms, front-month futures for deliveries at Henry Hub in Louisiana are trading at more than $8 per million British thermal units compared with over $4 at the same point last year and the highest since 2008.

Cumulative cooling demand since the start of the year in the Lower 48 states has been the highest since 2018, according to data from the U.S. Climate Prediction Center.

With many former coal-fired electric generators disconnected from the grid or dismantled, high cooling demand has translated into high levels of gas consumption.

In the western United States, prolonged drought and reduced hydro-electric generation has further elevated gas use.

At the same time, the United States has became the world’s largest liquefied natural gas (LNG) exporter, with volumes increasing by 12% in the first half of 2022 compared with the same period in 2021.

Most of the extra LNG has been shipped to Britain and European Union replacing lower pipeline gas deliveries from Russia (“United States became world’s largest exporter in first half of 2022,” EIA, July 25).

In the absence of the Freeport fire, inventories would likely be even lower and prices would have risen even higher.

Even with the recent slowdown in exports, however, working stocks in underground storage amounted to just 2,416 billion cubic feet (bcf) on July 22 compared with a pre-pandemic five-year seasonal average of 2,802 bcf.

Inventories had risen by only 1,034 bcf since the start of April compared with a pre-pandemic average increase of 1,104 bcf (“Weekly natural gas storage report”, EIA, July 28).

The number of rigs drilling for gas has increased to 155 up from just 104 a year ago, according to data from field services company Baker Hughes, but there has been little further increase over the last six weeks.

As a result, gas inventories are on course to start winter well below average, with Europe and Asia still scrambling for LNG, which will likely keep prices elevated.