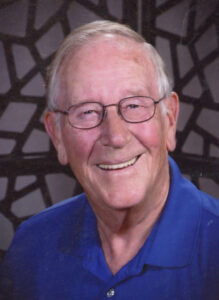 Vance M. Bricker, 87, of Lexington, Nebraska, passed away on Saturday, July 30, 2022 at Avamere in Lexington, surrounded by his loving family.

He was born on June 14, 1935, in Paxton, Nebraska to James M. and Emma (Crook) Bricker. Vance attended public schools in Paxton and graduated from Paxton High School in 1953. He was inducted into the United States Army on September 17, 1953 and proudly served his country until he was honorably discharged on September 16, 1955.

Vance was united in marriage to Dorothy Langmecher on October 9, 1955 at the Lutheran Church in Paxton, Nebraska. Six children were blessed to this union: Vance, Alan, Bruce, Laurie, Shelly and Kevin. Vance began his employment career as a high school ranch hand and taught chemistry and physics as Shelton and North Bend high schools. With a secondary education degree from Kearney State Teachers College in hand, Bricker then worked his way across Nebraska. He worked as an engineer with TRW Inc., a technology production company in Ogallala, then as an employee at Nebraska plastics in Cozad. His family then made their home in Lexington in 1973. In Lexington, Vance was hired as an administrative aide, a year later he was appointed to the position of environmental health and recreation director. In August of 1984, he became the personnel director and assistant city manager. He maintained that position until November of 1996, when he became the city manager until 2000 when he retired. Vance also taught classes in personnel management, organization development and organization behavior. He received his master’s degree in public administration in 1989 from the University of Nebraska – Omaha.

Vance loved the outdoors and would load the car with all six of the kids and take them fishing on a regular basis in the summers. There were also many nights spent with the children in a large army surplus tent, in the mountains of Colorado, or on a beach at the lake. Vance enjoyed many hobbies over the years, including hunting, golfing, yard work, a voracious reader and was a talented wood carver. Vance and Dorothy spent twenty-two years wintering in Arizona where they made many lifelong friends and enjoyed dancing.

Another passion of Vance, his dedication to his church. He taught confirmation classes, adult Sunday school, and was a former regional representative to the bishop’s committee on outreach. He was a charter member of the Optimist Club, former member of the Dawson County planning commission board, Jaycee’s and Elk’s Club. Vance was a Mason and Shriner, as well past president of the Lakeside Country Club.

His family, church, community and faith were always an important part of his life. Above all, Vance has left a tremendous legacy of love and faith to his family.

Besides his parents, Vance was preceded in death by his grandson, Adam; seven brothers and two sisters.

A Memorial Book Signing will be on Thursday, August 4, 2022 from 5-7 p.m. at Reynolds-Love Funeral Home in Lexington.

A Private Graveside Service with Military Honors will be prior to the Service at Greenwood Cemetery in Lexington.

In lieu of flowers, memorials are kindly suggested to Grace Lutheran Church in Lexington or Tri-County Shriners Transportation Fund.

Reynolds-Love Funeral Home in Lexington is honored to be assisting the family with arrangements.  Please share online condolences with the family by visiting: reynoldslovefuneralhome.com

​ Vance M. Bricker, 87, of Lexington, Nebraska, passed away on Saturday, July 30, 2022 at Avamere in Lexington, surrounded by his loving family. He was born on June 14, 1935, in Paxton, Nebraska to James M. and Emma (Crook) Bricker. Vance attended public schools in Paxton and graduated from Paxton High School in 1953. He

12 mins ago
Generated by Feedzy